The essay deals with the hypothesis of a global process of dislocation of the «abyssal line», adopting the concept of «abyssal exclusions» by Boaventura de Sousa Santos. The Portuguese sociologist, inspired in particular by the postcolonial and the decolonial debate, defines abyssal exclusion as a specific type of socio-political «absence» linked to «colonial sociability», the «invisibilization» of those excluded through a specific process that places subaltern social groups outside the social contract. This perspective proves useful today to frame the development of new forms of social exclusion that reproduce the South within the North. This exploitation is still legitimated by specific forms of «cultural violence»: inferiorization of the alterities and the disavowal of non-Western declinations of social order or social justice. This refers in particular to some social experiences that we will analyze, including forms of sociability emerging across Europe between those denied asylum, and situations where forms of exploitation due to colonial sociability live side by side with forms of labor exploitation due to the weakening of social protection in European welfare systems. But the essay explores how these abyssal absences could also be analyzed as «social emergences»: strategies of existence that manipulate the radical exclusion. Starting from the hypothesis that a dislocation of the abyssal line is underway, the essay proposes a type of research aimed at shedding light on these social experiences through «post-abyssal» epistemologies and research practices. 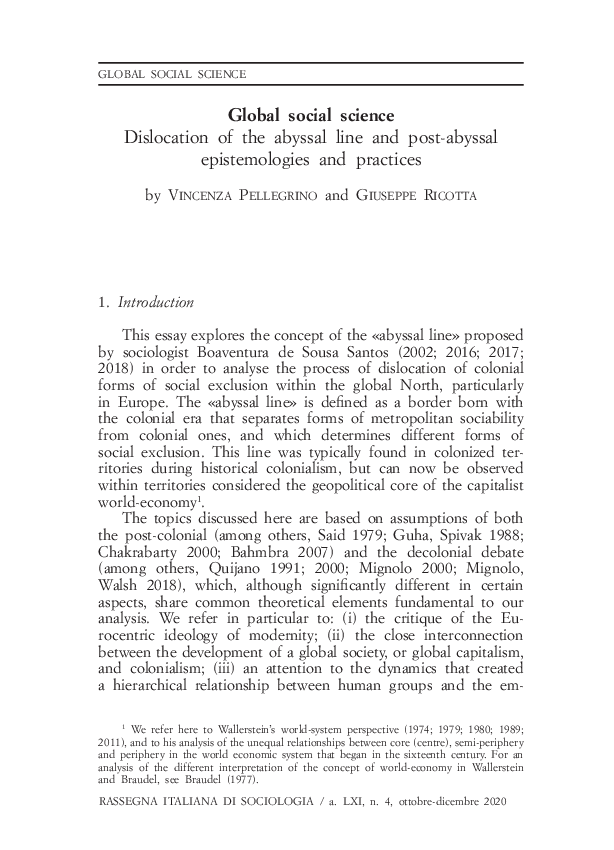