The aim of this paper is to show how, using Pareto's action theory, we can respond to the question of the social support to scientific activity in connection with the problem of the public understanding of science. The "interpretative approach" to the Public Understanding of Science and the Sociology of Scientific Knowledge state that people's attitudes toward science depend on a complex of values, beliefs, social representations and public images of scientific activity. However, these approaches do not explain why people use this complex to evaluate science, instead of objective and rational knowledge. Such an answer can be found using an action theory. In this paper, I suggest to use Pareto's Action theory. In his work, "Trattato di sociologia generale" (1916), Pareto connects epistemology, action theory and sociology of knowledge, and in this way he clarifies the relationship between epistemological criteria (truth and social utility), types of action (logical and non-logical) and types of reasoning (logico-experimental and pseudo-logical). According to Pareto, people do not follow logico-experimental reasoning, not because of their ignorance, but because this reasoning does not allow to determine the common ends directing human societies. These common ends (on which depend both social utility and collective behaviour) are embedded in "residues", namely the fundamental elements of pseudological reasoning. Therefore, people evaluate scientific activity on the basis of the consonance between science and these common ends. 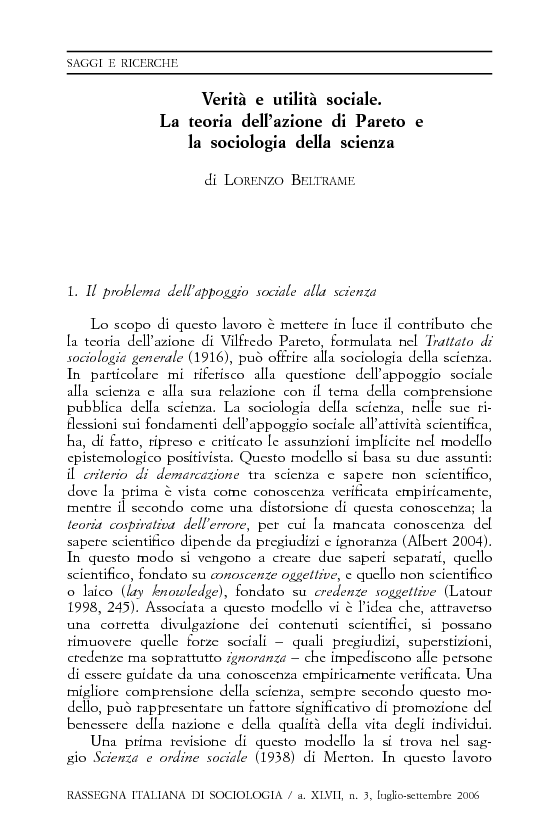