Intractable conflicts arise when facts and values are deeply intertwined. Involved parties give relevance to different facts or interpret them in different, irreconcilable ways. With this kind of problems, deliberative democracy is increasingly considered as more effective than "strategic" approaches (based on negotiation or aggregation of preferences). The article analyses three "virtues" of deliberative democracy: civic virtue, governance virtue and cognitive virtue. Public deliberation lowers the propensity to and expediency of strategic behaviour, and increases knowledge, raising the quality of decisions. Two interpretations of the cognitive virtue are then examined. The former believes in the unity of Reason. It maintains that a general consensus on the reasons underlying a choice is possible and necessary. The latter believes in the plurality of Reason. It contends that deliberative democracy requires only a fair consideration of all standpoints and proposals. The discussion focuses on Habermas and Rawls. Their "strong" reading of the cognitive virtue implies that solutions to intractable controversies can only consist of strategic compromises. A pluralist conception of Reason can be found in the feminist political thought and in Bohman's analysis of deliberation as social cooperation. However, the plurality of Reason makes deliberative decisions more prone to manipulation, and not easily distinguishable from strategic agreements. The argument developed shows the opportunity of renewing the approach to deliberative democracy, by rethinking its motivational and cognitive elements. Public deliberation is grounded on a pre-political level of cooperation, and while the answers to intractable conflicts suggested by Habermas, Rawls and many others move towards abstraction and generalisation, the opposite way seems more promising. 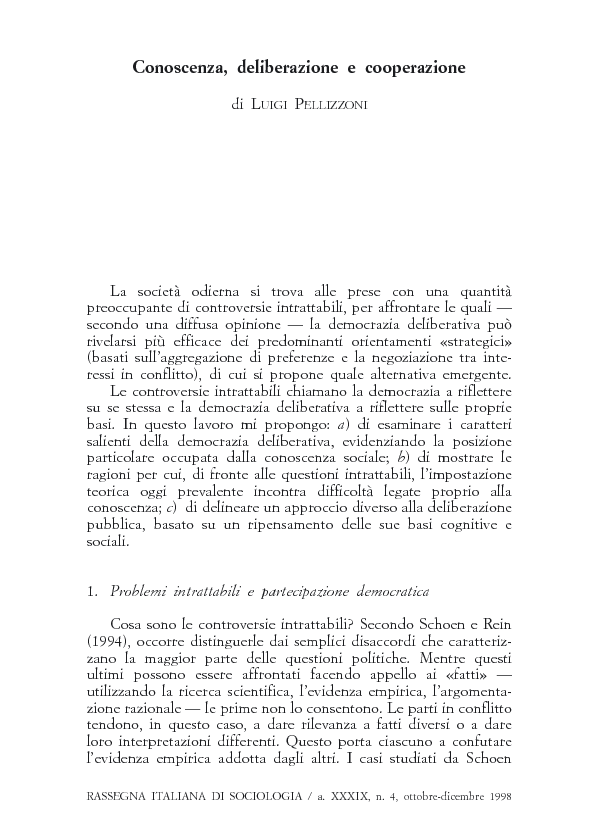