Based on an ethnographic case study, the article focuses on the cultural repertoires of motherhood and their moral normativity, and considers the identitarian, emotional, and affective «re-organization» that «becoming mother» demands. Such re-compositional work concerns everyday caring practices as much as self-construction and self-narration, and is performed on the background of an hegemonic role model, a «faultless version of motherhood» that establishes altogether what a mother must/should (not) do and what she must/should (not) feel - and display to feel - emotionally. On the one hand, «intensive motherhood» and its contradictions rest on the assumption of maternal love and extreme emotional involvement; on the other hand, the situated modali- ties through which the dominant model is put to work in everyday interaction leverage on maternal responsibility and internalized guilt. The research focused on the everyday care practices during the first year of life of a newborn, and employed fieldwork, video-analysis and repeated interviews with parents. Once traced the theoretical framework, the case study is introduced and then analyzed per relationships - mother-daughter, mother-father, mother-mothers - by focusing on both identity- and emotion-work. Conclusions are drawn on love and emotional involvement as interactional accomplishments, on the tabu nature of such a process, and on the role the latter plays in recomposing the contradictions of motherhood thereby perpetrating the dominant model even when it is resisted. 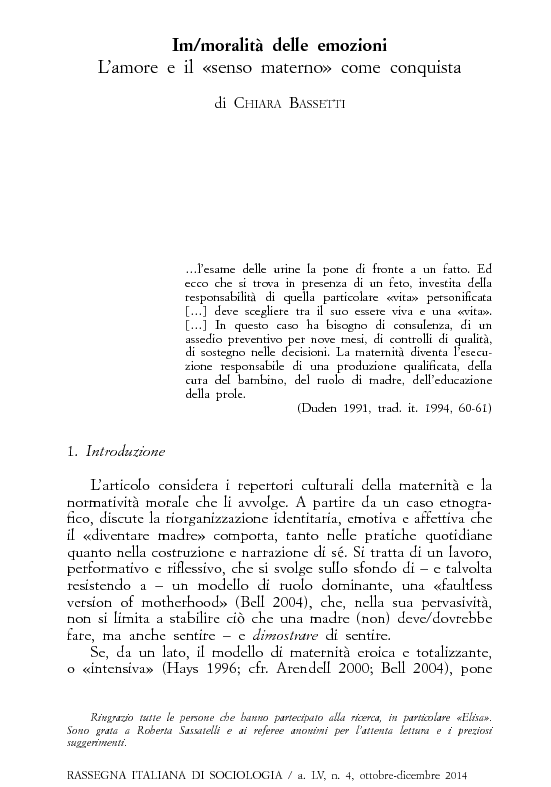