This article discusses the effects of the terroristic attacks of September 11th 2001 on social movements, in particular on peace activism. It presents the results of an empirical research carried out through structured questionnaires, administered to participants at the peace march (Perugia-Assisi) that took place on October 2001, that are compared with those collected among activists of the protest against the G8 in July 2001 in Genoa. September 11th had considerable effects on the conditions of movement's development, focusing attention on the issue of peace, emphasizing the need for nonviolent strategies, stressing the urgency of a "politics from below". If the opposition to the war and terrorism became a common discoursive frame, there is still a tension an interpretation of the war as a consequence of imperialistic relations and a more nuanced cultural and ethical interpretation. In the field of the action repertoires, both the experiences in Genoa and the need to also symbolically differentiating the movement strategies from both "militaristic" and terrorist behaviors pushed towards a more decisive choice for non-violent tactics, without however excluding direct action as unconventional, disruptive forms of protest, such as occupations, goins end, more in general, acts of civil disobedience. With respect to the organizational structure, the local social forum represents experiments in deliberative democracy and the search for local solution to global problems. Efforts towards permanent coordination and intervention in national politics produced, however, tensions and competition within the movement. The attitudes of the peace activists confirm a criticism towards representative forms of democracy and a criticism of the "institutional Left", already emerged in Genoa - a criticism reflected in the mistrust of the center-left parties towards the aims and the forms of the mobilization against neoliberal globalization. The article concludes with a reflection upon the emerging characters of the movement for globalization from below, and therefore the need to adapt some concepts and hypotheses coming from the sociology of social movement. 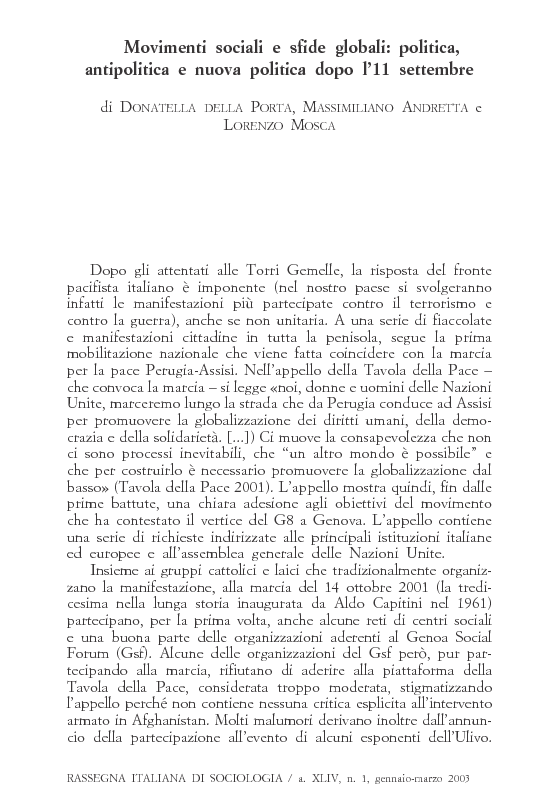