The notion of responsibilization of recipients of welfare services is one of the most recurrent and transversal issue in the on-going process of reform of western welfare systems. One of the meanings attached to this notion conveys the hypothesis that welfare benefits are to be deserved by claimants, by aligning to institutionally defined logics of behaviour. The rationale of this interpretation implies that claimants of welfare services are supposed to align passively to institutional requirements. Such a perspective neglects the potentialities of recipients' agency. Contrasting this view, the article proposes that welfare claimants play a more active and performative role in the interplay with providers of welfare services, starting from the initial encounter with gatekeepers. On the basis of a qualitative research conducted in three Italian municipalities, the article explores the patterns of action that may be followed by applicants of social welfare services in order to «personalize» the provision of the benefits they are claiming for. The empirical findings suggest that welfare claimants are able to perform a variety of strategic actions in order to shape their possibilities of receiving services and that these actions can diverge from expected logics of responsibilization. From a micro-level perspective, the article sheds an alternative light on the issue of responsibilization and individualization of welfare claimants, considering it as a dialectic process. This interpretation is presented as the premise for a more comprehensive re-configuration of the study of the access to social welfare benefits. To support this viewpoint, the micro-analytical perspective is intertwined with an outline of the main social and contextual conditions that traditionally «isolated» and fragmented individual experiences of access into a multitude of sequences of personal endeavours, rather than framing them in a more collective and societal dimension. 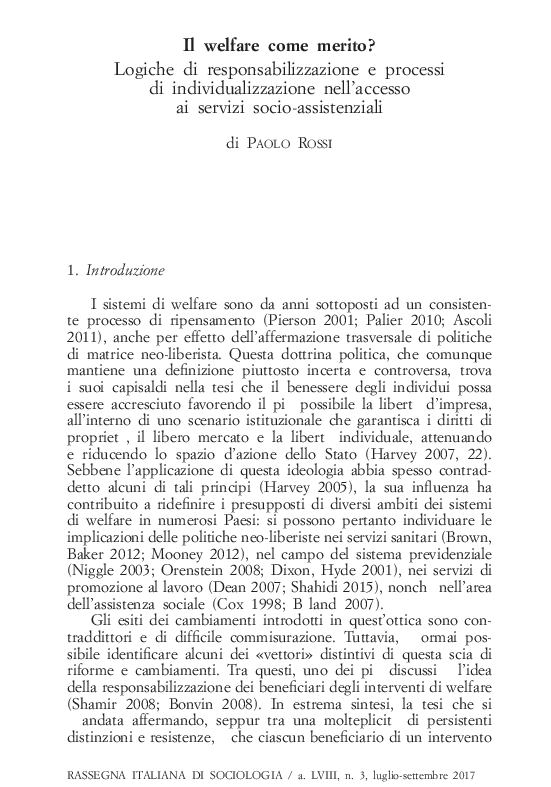