The article, conceived as a map (or a bike ride?), aims to shed light on the ways sociology has explored the cultures of motorcycle and motorcycling. Bikes and their riders have made very few appearances within sociological literature. In the Anglo-American sociological literature much has been written about hardcore bikers, and brief glimpses appear as citations of early cultural studies’ essays on subcultures with their scooters and bikes; but there has been little research on the much larger segment of the population of motorcycle enthusiasts or simple motorcyclists. The article tries to fill this gap by exploring the ways motorcycle has appeared within sociological analysis, by acknowledging that motorcycling is infused with social and cultural significance, tied up with complex issues of politics, consumerism, gender and sexuality, and personal and subcultural identity. The main spots of this map (or the stages of this ride) are: the «moto-mobilities», within the general framework of the recent «mobilities turn»; the subcultural identities and their stigmatization and consumption; the ethnographic accounts of contemporary motorcycling cultures; the research on «edgework» and the voluntary risk taking; the representations in popular culture (cinema and television – and even art expositions). 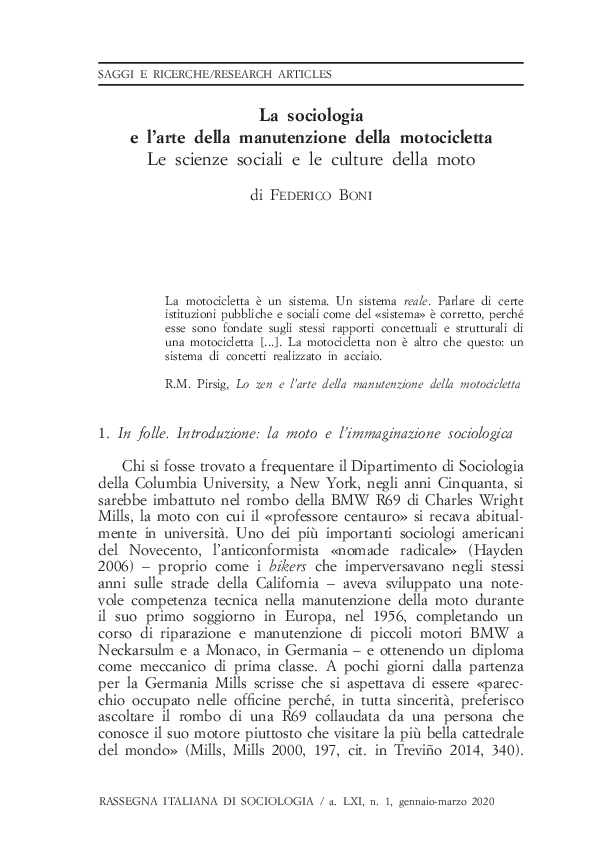