This paper addresses two examples of water conflicts in a unique situation of the socio-environmental impact of dams: the Belo Monte dam in Brazil, and the Cañon del Pato dam in Peru. Surrounded by controversies about the right of use of natural resources, the dams caused the crisis of the pact for the water sharing, threatening the ways of living of indigenous communities too. In both conflicts a «war between unequal parts» (Sevá 1995) can be observed, where local communities face disproportionate competition on land use provoked by a (profit-driven) association between governments and big companies – a coalition that in recent years has become more common across all Latin America. The case in Brazil exposes the conflicts concerning the process of the dam construction. The case in Peru shows the challenge of a single local community to maintain their quality of life in its own territory. By analyzing the chronology of the events, the authors created a comparative scheme in which it is possible to identify and classify some ground-based variables to insert in the socio-political frame, allowing to explore the conflict complexity. Complexity that is attempted to unravel through the conceptual lens of political opportunities and social organizational structure. 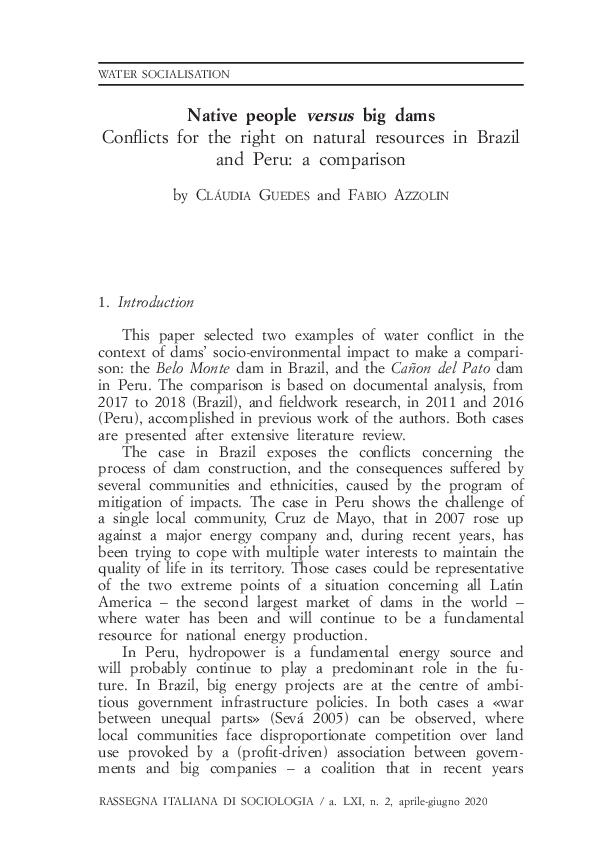