A tension between a scientific «expert» knowledge and a «traditional» local knowledge has always crossed Disaster Risk Reduction policies and practices. Big detention basins or large engineering works are usually preferred by delegated agencies for flood risk mitigation measures based on scientific hydraulic models. Due to economic or geo-morphological reasons these solutions can’t be always implemented, and so challenging «traditional» cost-benefit analysis. This was the case of a six-year project called Rural Sustainable Drainage System (RSUDS), led since 2014 by the local government of Stroud, a village in South West England. Following the 2007 major floods occurred in England, four action groups were formed in the study site to demand for further flood risk mitigation measures. Due to the inefficiency of the engineering solutions proposed, which consisted of two large ponds working as detention basins, the bottom-up process resulted in the implementation of nature-based solutions consisting also of dozens of different small ponds with different functions to prevent from flooding. The different actors were bearers of different kind of knowledges, which interacted at local level, driven by relationships between actors and between actors and water catchments. Situated relationships and practices activated and produced local knowledges, due to the role of water flowing in shaping risk and risk framing. In terms of lesson learned, this case study showed how considering local knowledge in flood risk framing and management can refer to the multiple functions of nature-based solutions and be a threshold for effectiveness. 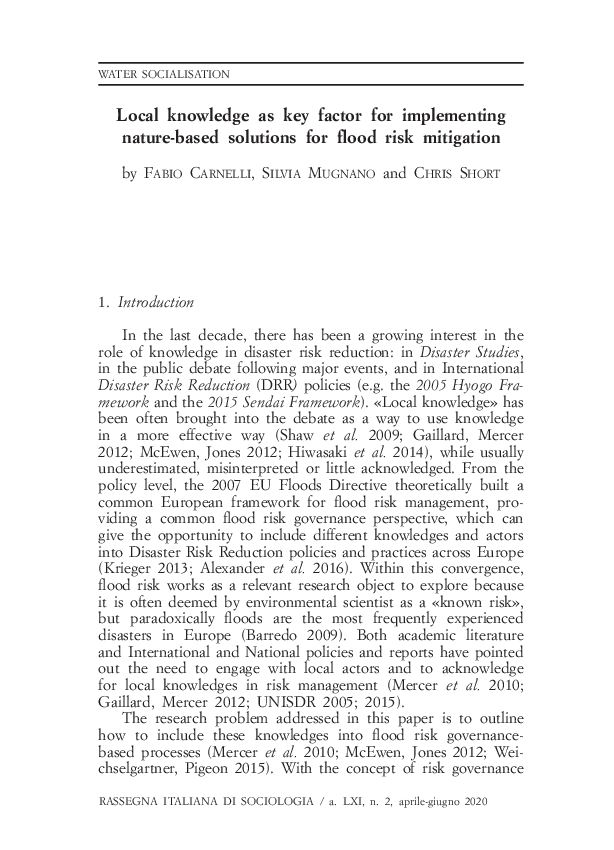