Behind the consensus on the need for social science to become «global» lies a theoretically, methodologically, and politically meaningful opposition between different ways of understanding this nevertheless deemed necessary shift. We distinguish between two different narratives of the global, which are grounded in different «grand» narratives of modernity/capitalism, and which can be related to alternative geopolitical standpoints. A «Western narrative of the global as recent discontinuity of modernity» emerged between the late 1980s and the early 1990s, associated with the spreading of the idea of «globalization» as a qualitatively new phenomenon, and aiming at supplanting or integrating the nineteenth century-based grand narrative of modernity. A «Southern narrative of the global as longue durée» had however already crystallized between the late 1960s and early 1970s, as a theoretical expression of the anticolonial sentiments and movements that had arisen in the non-Western/peripheral world, and having its focus on the historical connections which since the sixteenth century had united both core and peripheral zones of the world(-)system in a single stream of history. The differences between these two narratives of the global are then investigated through three crucial theoretical knots: the critique of «methodological nationalism»; the critique of «Eurocentrism»; and the relation and tension between «universalism» and «particularism». 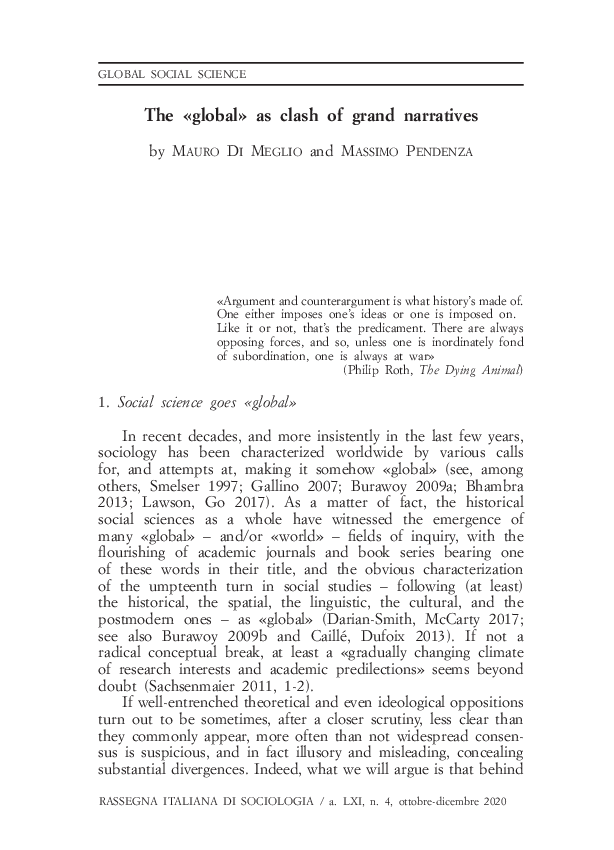