Support for the welfare state is often explained through the principle of self-interest, looking at individuals’ social position. However, the welfare state does not gain its wide support only from the neediest segments of the population, which would not explain its popularity, at least in Europe. There is in fact a large fraction of the ‒ loosely understood ‒ middle class that benefits from the welfare state, either directly or indirectly through the jobs that it creates. Yet scholars are divided on how to measure socio-economic position and identify the «middle class». Using data from two rounds of the European Social Survey, this article tests the merits of Oesch’s proposal to investigate attitude towards the welfare state. Findings are compared with those obtained with the more conventional European Socio-Economic Classification (ESEC). The conclusions are that although Oesch’s schema highlights interesting and meaningful differentiations in welfare attitudes, particularly among middle class occupations, it is not significantly better than ESEC, and the explanatory power of the class concept itself should probably be reconsidered, at least with regard to the phenomenon investigated here. 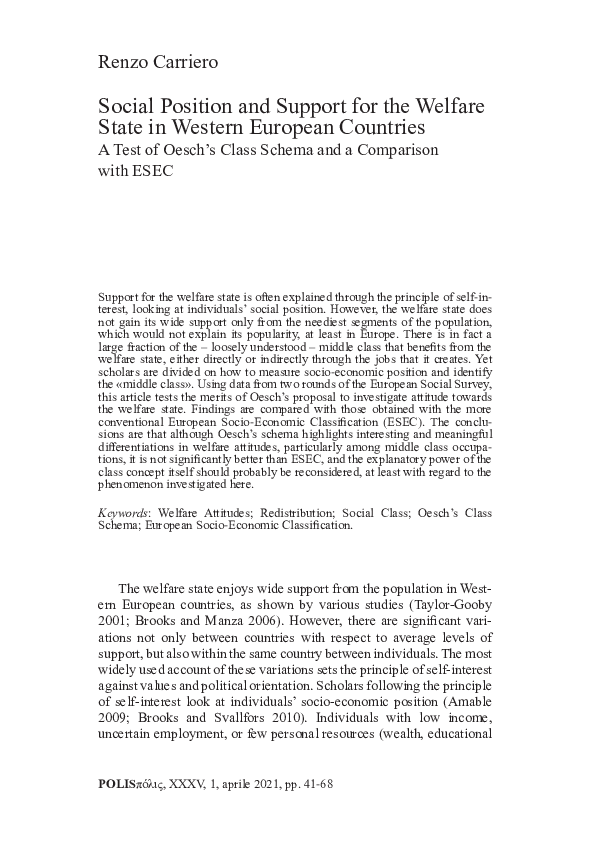