The article analyses the political personalization and disintermediation in two regional contexts of Southern Italy, Calabria and Sicily. These contexts - historically affected by forms of «particularistic personalization» and with a weak presence of the mass party - are also characterized by the pervasiveness of the catch-all party and patronage. The essay assumes as hypothesis the diffusion of political personalization and disintermediation also at the regional level. Investigating these transformations in the political systems, the analysis underlines the influence of path dependence dynamics on current changes, stressing also similarities and differences between Calabria and Sicily. The qualitative research focuses on the political paths of the councillors elected in the regional assemblies. The areas investigated concern the political socialization, the access to political representation, the construction of consensus, the political communication and the electoral campaigns. Starting from heterogeneous political paths, with more or less intense party ties, emerges a common tendency towards disintermediation and personalization, in new forms, through new communication styles, and new tools such as technological ones. In the analysed contexts, the article underlines the diffusion of an instrumental disintermediation logic that accentuates the weakening of some functions performed by the parties and maintains others. 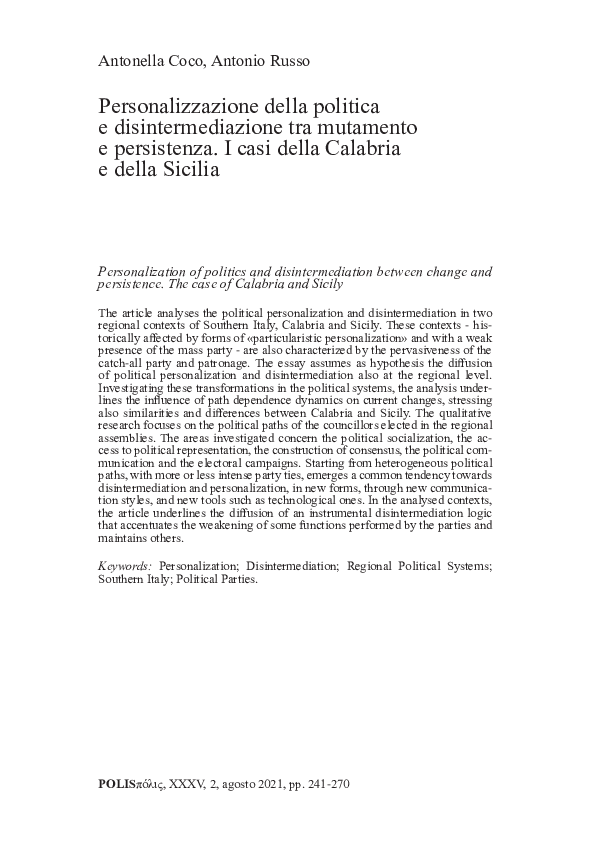