Nationalism is generally seen as an issue owned by «traditional-authoritarian-nationalist», typically right-wing parties. However, data on electoral manifestos by the Manifesto Project shows that other formations too adopt nationalist positions. This includes a party family such as Western European social democracy, which traditionally opposed such stances and, as a result, has been largely neglected by the literature on nationalism, especially in terms of empirical investigations. This article investigates under which conditions social democratic parties in this region adopt nationalist positions in their electoral manifestos during the ten-year period following the outbreak of the late-2000s global financial crisis (2008-2018). It does so by performing a crisp-set qualitative comparative analysis, which is able to handle and account for causal complexity in the form of conjunctural causation and equifinality. Such a configurational analysis builds on a theoretical framework positing that high levels of immigration, high ethnic fragmentation, a struggling national economy, and a supportive national public opinion are conducive to nationalist position-taking by parties. The results of the analysis indicate that whilst, as expected, no single condition is alone necessary or sufficient for the outcome of interest, two conjunctural and equifinal paths are sufficient for social democratic parties to endorse nationalist stances: a «fence-building» and a «preservation» scenario. 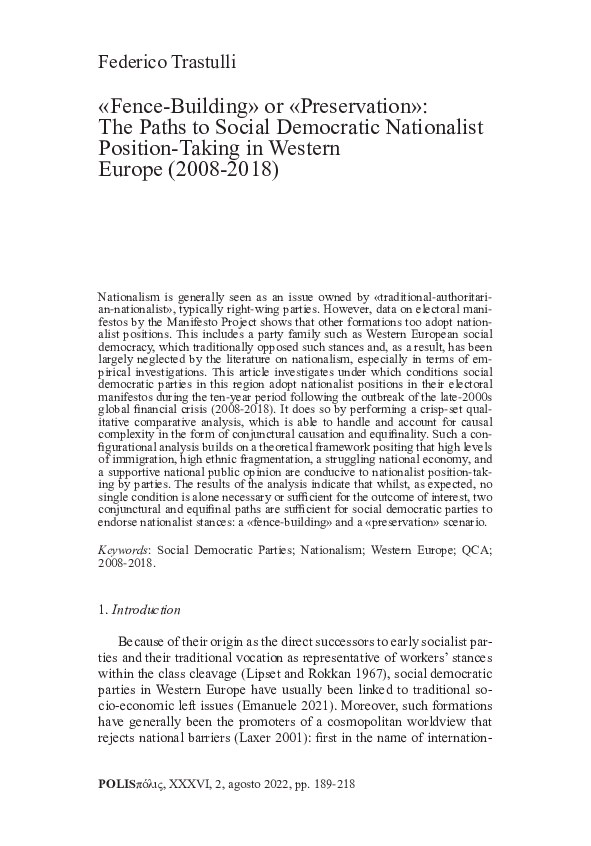