News media can play an essential role in curbing corruption. They can exercise both tangible and intangible effects investigating and denouncing misbehaviours, but also reinforcing a shared sense of common interest. Media can facilitate the exercise of a virtue control, a particular function that public opinion should employ to supervise policy makers and public affairs. However, as our study confirms, Italian press only partially exercises these functions, due to some distortions related to the polarized pluralist model of journalism. In this study, part of a much larger Eu funded project, we investigate the coverage of corruption and other related topics in 46.239 articles published in four Italian newspapers («Corriere della Sera», «Il Giornale», «la Repubblica» and «Il Sole 24 Ore») from 2004 to 2013 through a computerized content analysis. The main assumption of this study is that the journalistic coverage of corruption in Italy is influenced by judicialization and polarized dramatization, which undermine the construction of a unanimously shared feeling of indignation, and the socalled control of virtue seems to be just a partisan control influenced by political affiliation. 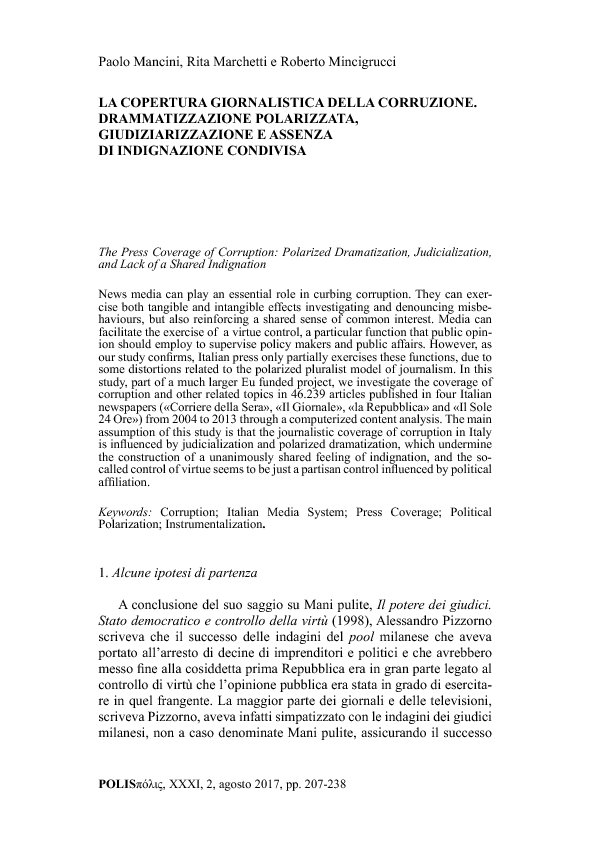