The paper investigates the consequences of grandmotherhood on retirement for Italian mid-life women born before 1949. It accounts for eventual differences in terms of work history, as the transition to retirement depends on the number of years worked, and the kind of job held. Using retrospective data from the ISTAT Multipurpose Survey Families and Social Subjects (2009), individual fixed-effects models show that there is only a weak relation between the birth of the first grandchild and retirement for Italian grandmothers, and no differences in term of work history. The authors argue that the result could originate from two parallel processes. On the one hand, mid-life women seem to retire before becoming grandmothers in Italy (as Kaplan-Meier survivor functions suggest). This could be due to the interplay of the postponement of fertility and availability of early retirement options: women became grandmothers late in life, and they have the possibility to retire early. On the other hand, Italy has a very low female labour force participation rate, and several young mothers are not employed due to the difficulty to reconcile work and family. In other words, young mothers do not need support by grandmothers with childcare, and therefore, grandmothers do not need to early retire so to be helpful with care duties toward grandchildren. 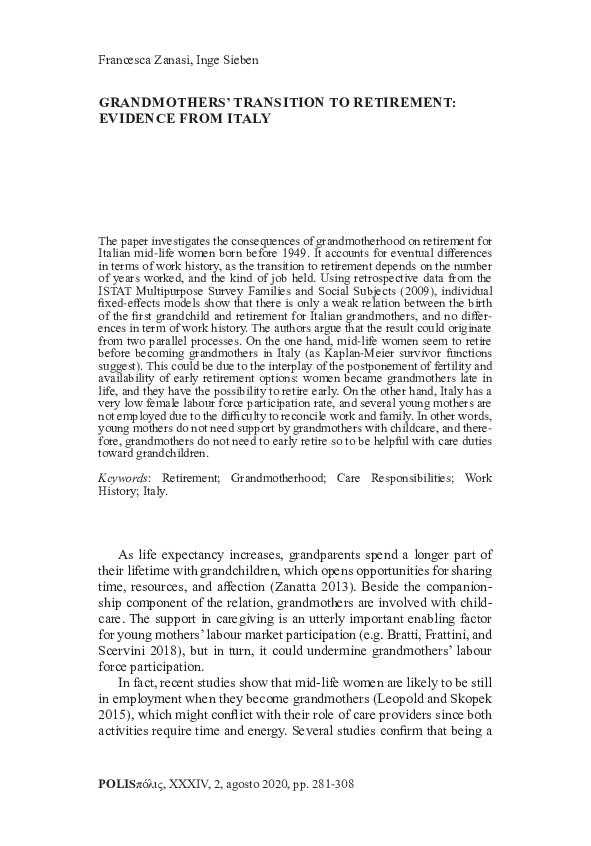