The first assumption of this contribution is that climate change constitutes evidence and that its dependence on anthropogenic emissions of greenhouse gases is an ascertained phenomenon, contested only by a small group of deniers: «anthropogenic greenhouse gas emissions have increased since the pre-industrial era, driven largely by economic and population growth, and are now higher than ever. This has led to atmospheric concentrations of carbon dioxide, methane and nitrous oxide that are unprecedented in at least the last 800,000 years. Their effects, together with those of other anthropogenic drivers, have been detected throughout the climate system and are extremely likely to have been the dominant cause of the observed warming since the mid-20th century» (IPCC, Fifth Assessement Report 2014, p. 4). The second assumption is that since the issue was raised and brought to the attention of policy makers with the establishment of the Intergovernmental Panel on Climate Change in the late 1980s, the state of the climate has deteriorated further, despite the signing and then implementation of the Kyoto Protocol (1997). The aim of this contribution, then, is to reflect on the factors – cognitive, anthropological and institutional – of resistance to the adoption of effective and adequate responses to the threat that climate change poses to human health and the present, and above all future, human condition. The thesis I will argue is that these forms of resistance arise from the fact that, to polemically paraphrase the title of a famous book by Bruno Latour, we are still modern: modernity – the form of subjectivity, the world image (Weltbild), the configuration of institutions – is our problem. The reasons for the persistence of the modern paradigm are of a performative and cognitive kind: on the performative side, they consist of the freedom and material well-being – of comfort as Sloterdijk would say (Sloterdijk 2013, pp. 12-13) – gained thanks to modernity; on the cognitive side, they refer to the exponential increase in complexity that has made our economic, social and institutional world ungovernable. In the last part of this contribution, I will try to further, this time in a positive sense, an intuition contained in Down to Earth. Politics in the New Climatic Regime by Bruno Latour: a reduced scale of regulation and the consequent institutional and economic simplification can be a resource and not a problem. 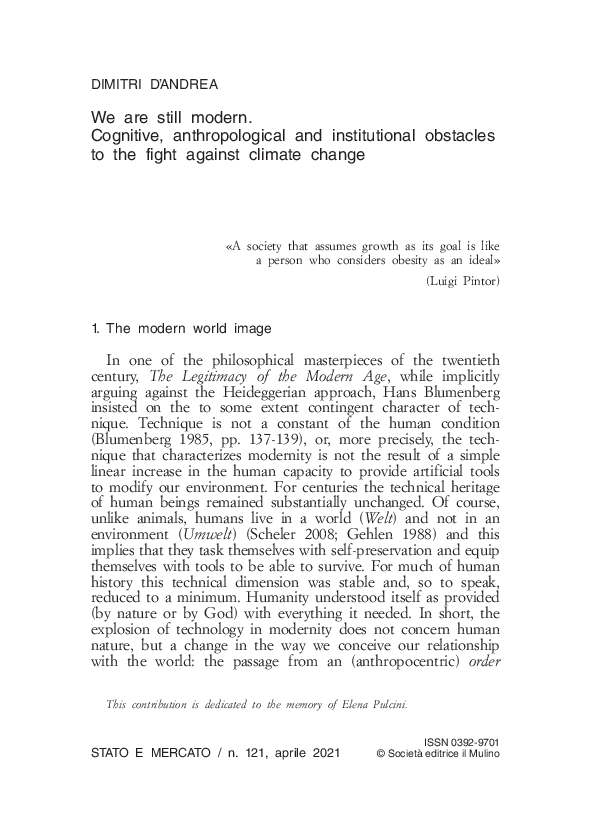