During the last thirty years, the Left’s electoral strength has constantly decreased in most of the advanced democracies. At the same time, the social composition of its electorate has changed considerably, with a substantial loss of votes among the less privileged social groups – first of all, the blue collars. This article focuses on the relationship between these two phenomena and investigates whether the main left-wing parties’ reduced representation of the more disadvantaged groups may have influenced their electoral decline. Our starting point is the change in social stratification that has affected the Western democracies since the 1980s. Then we tried to highlight the relationship between the old and new occupational classes and their vote for the left-wing parties through a longitudinal analysis that covers the last two decades. Although the new profile of social stratification has created many problems for the Left’s electoral support, it seems also necessary to consider the influence of political strategies and political supply. In all advanced democracies the main left-wing parties tried to compensate the decline of the old working class, and to bypass the serious difficulties in attracting the new lowskilled service workers, by redirecting their political supply toward the new middle classes. However, the electoral results were not satisfactory. The ability to attract the vote of the less privileged groups decreased and many workers were attracted by the new radical right. At the same time – contrary to what is often thought – the middle classes’ support did not grow significantly. Only the Nordic parties have been able to reduce the electoral decline by building a coalition based both on the less privileged groups and on those employed in the socio-cultural sector. 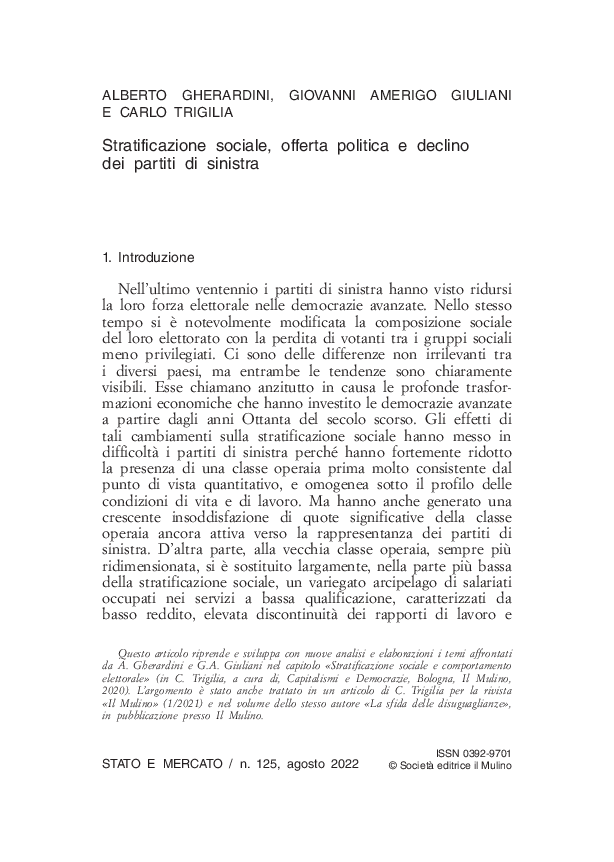