European welfare states are in varying need of reform. Intensified international competition, ageing populations, de-industrialisation, changing gender roles in labour markets and households and the introduction of new technologies, all pose severe strains to welfare state programs designed for a previous era. These common post-industrial challenges impose quite divergent problem loads from one welfare state to the next. This reflects heterogeneous economic development and social structure, but, more crucially, different social policy legacies, distinct systems of interest organisations and democratic institutions. Although the principal site of reform and policy innovation is the nation-state, the process of recasting European welfare states is no longer exclusively a national affair. Today social and employment policy developments are, under conditions of growing international economic and political interdependence, severely constrained by the Economic and Monetary Union (EMU) and increasingly shaped by initiatives like the European Employment Strategy (EES). The character of the reforms pursued in the 1990s, in the majority of cases under Center-Left governments, is best captured in terms of institutionally bounded policy change. Problems of sustainability triggered a dynamic of "renovation" and "re-casting" current policy so as to achieve a better "goodness of fit" with new societal challenges and pressing economic constraints. The precise policy mixes that have ensued have been critically shaped, besides policy legacies and institutional structures of decision-making, by policy makers' capacity for "innovation", intelligently using the institutional constraints and policy resources at their disposal. In this paper I examine concrete experiences of bounded policy innovation in the areas of wage bargaining, employment policy, family policy and pensions. Together with social policy initiatives in recent years at the level of the European Union, these domestic employment and social policy initiatives, represent a dynamic process of "self-transformation of the European social model(s)". 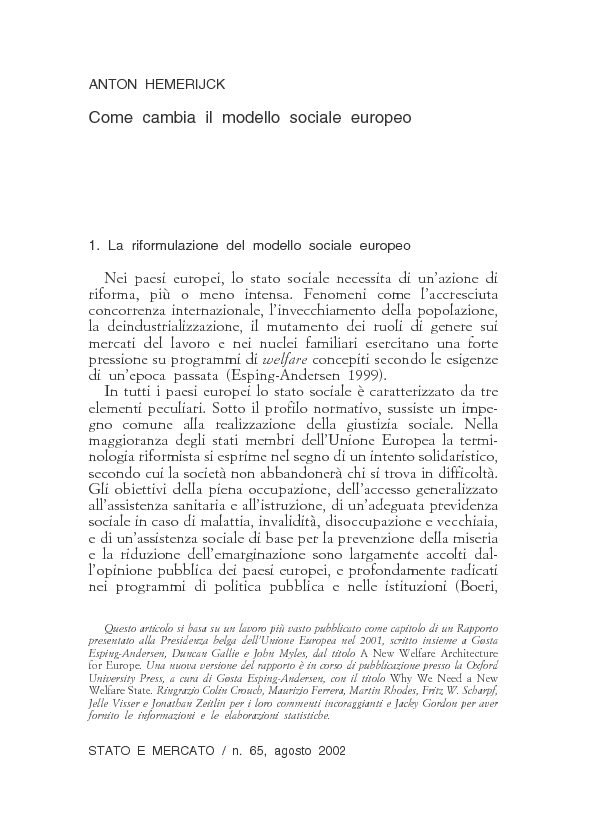