The economic reforms of '90-'91 marked a turning point in Indian economic path; now India is one of the most promising market in the world, according to most of the international observers. The passage from the Hindu Growth to the new Asian Miracle with an average growth rate of 6-7% in the last fifteen years, (mostly thanks to consolidated democratic institutions, the acceptance of the market rules, a population of more than one billion people and a labour cost among the lowest in the world), is transforming India's economy and society. The main purpose of this article is to focus on the impact of the liberalizations on the SSI (small scale industries) sector. The TFP (total factor productivity) growth data and the Small Scale Industry Census of 2001-2002 are the corner stone of this research. The debate about the role of the small enterprises is very important in India where the SSI sector was considered one of the main instruments for the economic and social development. Until now this sector has been the backbone of the national economy, although, as other researches on the matter pointed out, the former protectionist policy created a fragmented, technologically backward and not internationally competitive SSI sector. The purposes of this research is the analysis of the problems that still do exist. Notwithstanding the industrial reorganization program is exceeding every expectations and firms in this sector are adapting to the new environment with extreme dynamism, the legacy of the past protectionist policy is hard to clear off. Besides, the services and IT sector are showing incredible growth rates and they could represent the way to consolidate Indian economy in the international market. However, the risk that the improvements obtained in service and IT sectors can not be spilled off to the other economic sectors (included SSI) could bring India to loose important challenges with its competitors, especially with China. 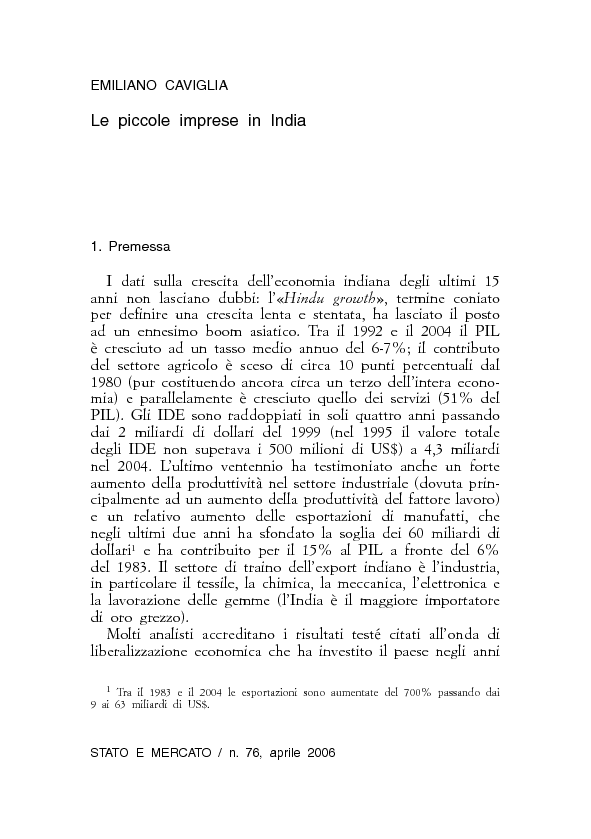