Tuscany Region has recently approved a regional law aiming to promote new forms and channels of citizen participation in public decision-making processes. The article analyses the origins and the political objectives of this law and the wide participative process by which the law itself was devised. The scenario in which this project was conceived is that of a region, such as Tuscany, still characterized by a high level of "social capital", but with an increasing risk of erosion to its traditional "civicness". The normal mechanisms of electoral accountability and democratic responsiveness seem hindered and the "participative propensity" of citizens does not often find ways to achieve positive interaction with institutional decision-making processes. Hence, the idea was of a law that does not try to impose new formal participative procedures, but encourages social and institutional local actors to pursue and implement new forms and practices of civic engagement and participation. The article analyses the structure of the law and the main alternatives discussed during the participative process by which its contents and goals were eventually defined. One of the most important features is that, according to the law, the requirements that a participative project must have, in order to be admitted to regional support both financial and organisational, are those typically prescribed by the normative principles of deliberative democracy. The results are significant, because this regional law may be considered as a first case in which the normative model of deliberative democracy has been transposed into an institutional framework and supported by administrative procedures. In this context, the Tuscan law may provide a particularly innovative solution to the controversial linkage between public deliberation and institutional decision-making processes and, more generally, between participative democracy and representative democracy. 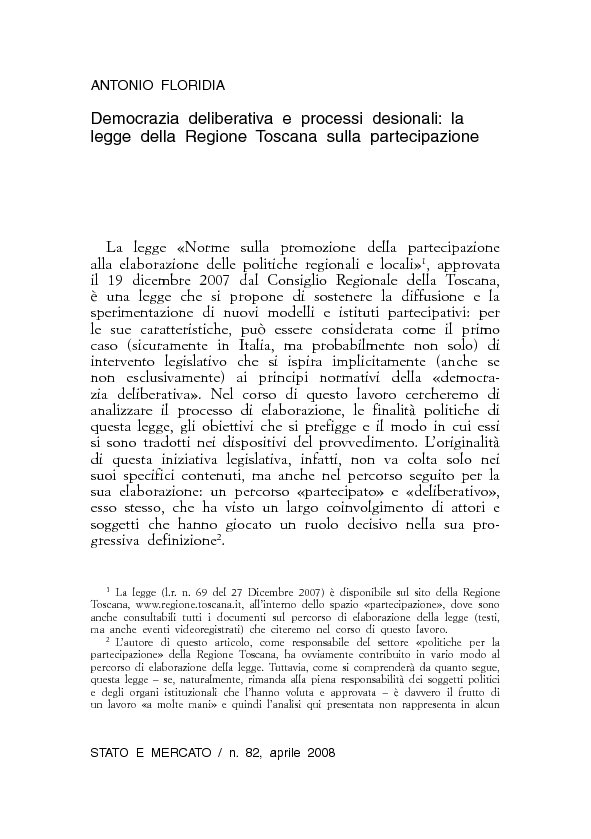