Keywords: I31 - General Welfare; I28 - Government Policy; I0 - Health, Education and Welfare.

There is more than one crisis going on in European welfare states, although the front place taken by the financial one in public discourse and in national and EU policies risks overshadowing the other ones, thus also reducing the space for a constructive, not only destructive change. It also reduces the space for democratic decision making. These risks a not incurred to the same degree in all countries, however, given differences in their welfare state development, political and cultural history and position in the international market. These cross country differences, furthermore, which in part overlap with the de facto power relations within the EU as they developed through the financial crisis, are increasingly becoming themselves one of the reasons of the EU crisis. With austerity being the main approach supported by the BCE and by the EU intergovernmental bodies, «debtor» countries are loosing a sovereignty already undermined by footloose capitalism, in favour of supra-national bodies increasingly marked by inter-country asymmetry in decision making power. After a synthetic overview of the different crises affecting the national welfare states and the European social model and of the risks of an exclusive financial approach, the paper discusses whether they also present opportunities for change in the direction of greater efficacy and equity, at what conditions. 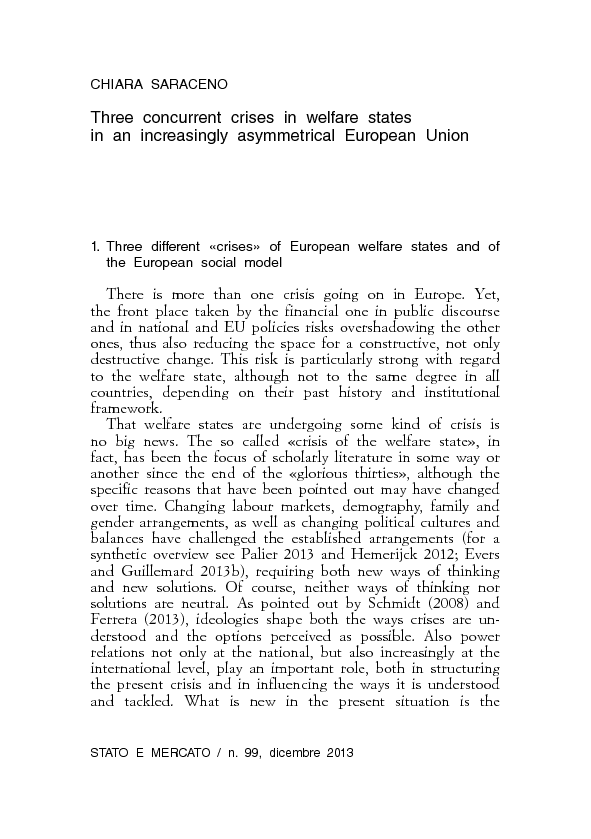