The article contributes to the analysis of the transformation of industrial relations in Europe by presenting an analysis of long-term trends and by testing the presence and endurance of clusters of industrial relations systems in Europe, on the basis of some basic quantitative and qualitative indicators. The objective is two-fold: the first section illustrates the general trends, rather than the differences across countries, in Europe as a whole, and in EU15 and Norway as opposed to EU12; the second section addresses the question of whether these trends have been accompanied by the blurring of boundaries between different «models», or established arrangements. A further objective is the identification of changes in the association of individual countries with the underlying cluster structure, in the 1960-2012 period. The analyses confirm the clear distinction between EU15 and Norway on one side and EU12 on the other. In the first group of countries, there are signs of long-term changes in industrial relations indicators, with the decline of union density, the decentralisation of the bargaining structure and the diffusion end broadening of opening clauses. However, bargaining coverage and coordination remain rather stable. In EU12, with few exceptions, the picture and the tendencies indicate a marginal role of industrial relations since shortly after the start of the transition phase (low union density and bargaining coverage, decentralised and fragmented bargaining structures). Industrial relations and collective bargaining involve a minority of employees and cover only quite limited parts of the employment system. The cluster analysis suggests that the structure of the various configurations of industrial relations in Europe is rather stable and tends to aggregate around four clusters (Nordic, Continental, Southern European, Disorganised). But there are also signs of a general downgrading of the role of industrial relations. The compression on the lower end of the spectrum in increasing and the traditional core of European industrial relations, the continental cluster, is moving downwards. Industrial relations in this particular juncture seem more fragile and vulnerable to economic and political processes, and overall less autonomous from policy-makers. The condition of ever-weaker actors and relatively stable structures and institutions does not appear to be sustainable in the long run. 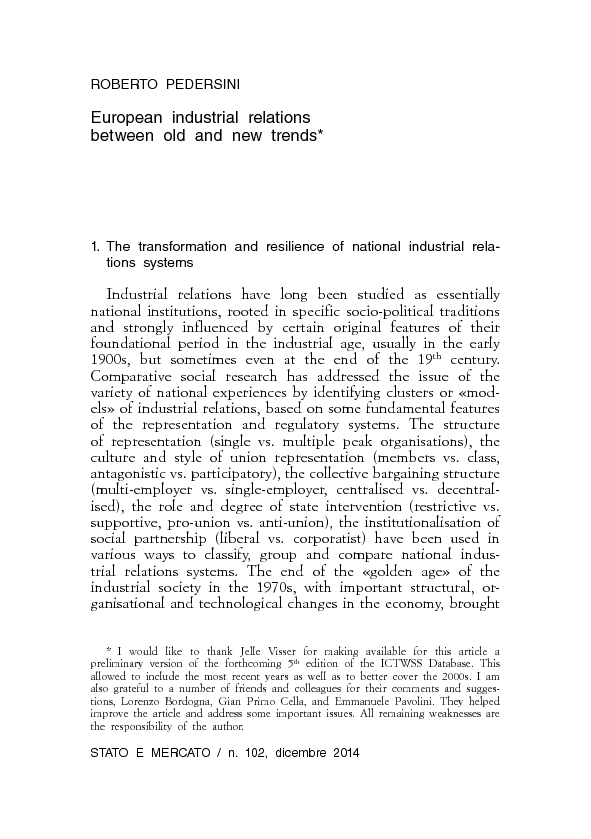