This paper deals with the economic and social situation in Europe at the end of the year 2014, after the great international financial and economic crisis of 2008-2009 and the following European crisis. It deals mainly with the consequences of both crisis and of the economic policy enacted in the European Union (EU), on European society and economy. The goal of this paper is neither to investigate and discuss why the crisis started and continued, nor to present and suggest a possible way out. Its focus is in between the start and the possible end of the economic recession and of the social difficulties. Its key message is that the consequences of the crisis are such not to allow any easy or foreseeable end, with the current economic policy and with the current social and economic dynamics. Europe is in a trap. For three main reasons: a) because European macroeconomic policies are unable to put an end to present crisis, even in a longer run: worse, they basically transformed a deep international recession into a permanent state of depression of the European economy; b) austerity is producing a sharp reduction of public and private investment, and of R&D and education expenditures: exactly what is needed more to relaunch depressed economies and reinforce their competitiveness. Austerity is as well reducing those social expenditures and policies needed to keep European societies together; c) the extraordinary length of the depression is producing new fractures within Europe (and exacerbating older ones), creating a very unequal distribution of the adjustment cost. So, while some Europeans are hit, others benefit from the current situation and strongly support the continuation of the austerity measures. A radical change of the economic policies that are currently pursued is needed; with no change, Europe could continue to stay for years in a situation of social and economic depression, until a shock will dramatically change the course of its future. 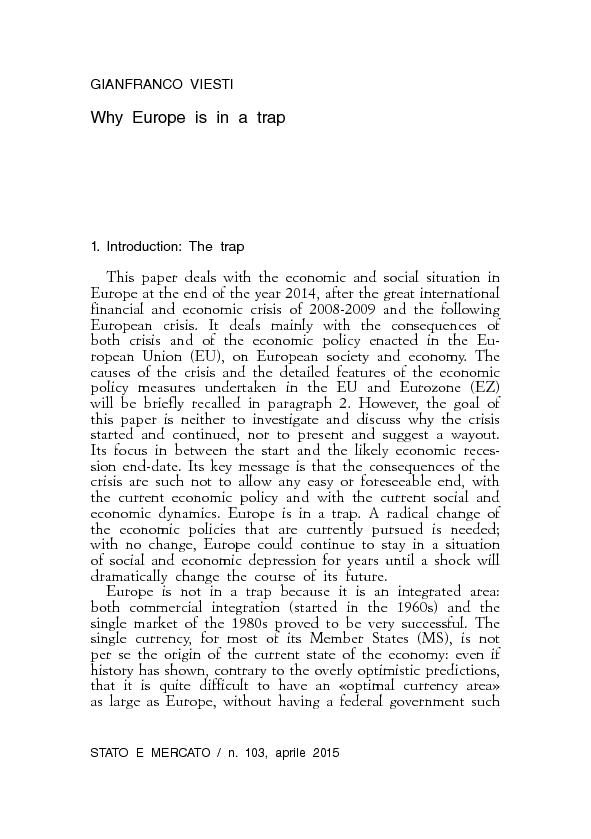