This article proposes a reflection on anti-mafia policies, with a particular focus on the implementation of the policy of dissolution of municipal councils. The fundamental argument of the article is that anti-mafia - in all its different forms - holds the power to define what mafia is. Therefore, to understand mafia one has first to understand anti-mafia. One has then to understand how the action of the State contributes to construct the images of mafia which are widespread within our society and which in turn shape the policies against mafias. To date the socio-political research on anti-mafia public policies has still to be fully developed, despite the relevance of the issue and the enormous resources invested. Moreover, the analysis of mafia phenomena and anti-mafia policies is undermined by numerous interpretive and methodological traps. The article identifies and describes some of the traps that render the study of mafias particularly problematic. In this respect, in the second part of the article, the analysis of the policy of dissolution of municipal councils due to mafia infiltrations is employed as a possible methodological laboratory. After a survey of the main aspects of this anti-mafia policy (how many councils have been dissolved, in which regions, in which years, of which political orientation, etc.), the article draws its conclusions about the roles played by this policy instrument, and, more generally, about the necessity of a closer and contextualized study of anti-mafia policies. 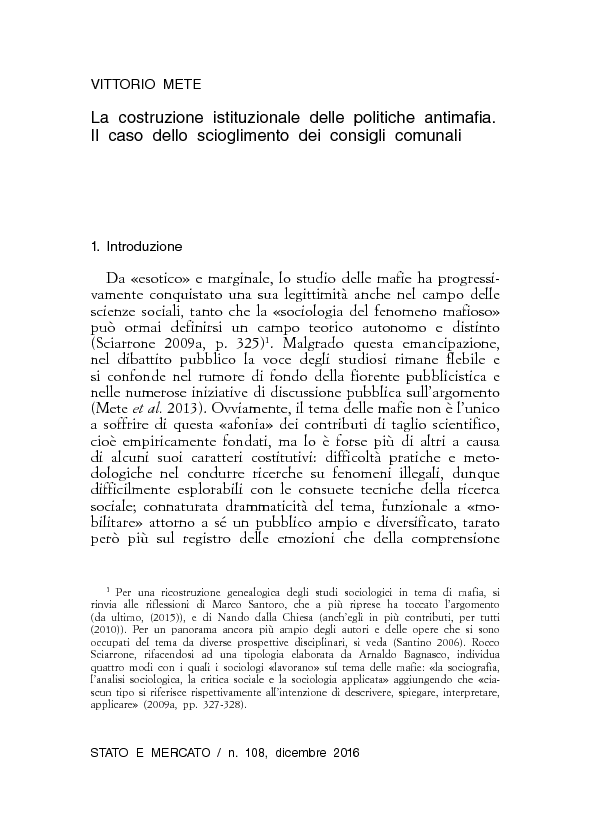