As always in social and political sciences, theoretical thoughts derive from a surprise, or better from the questions that the surprise provokes in the observer. In this case the surprise is concerning the widely held trend to consider as obvious, taken for granted in the democratic systems, the enforcement of the principle (and of the rules) of majority. The surprise moreover is sustained by the perception of a «mistery» (such since the times of Locke and Rousseau): why does the minority have to agree with a majority decision, when democratic systems are based on the consent of all the citizens? Going back to the origins of this enforcement, that is to the times where the majoritarian principle and rules where absolutely out of the political tradition, can contribute to provide some answers to the theoretical questions. The article so returns until the medieval pontificial and imperial elections, on the basis of the masterly historical reconstruction of Edoardo Ruffini. The principle (and the annexed rules) immediately revealed important anomalies: first of all the difficulty to legitimized it through individualistic arguments. By consequence the relationship of the principle with the existence and the operation of collective subjects, considered as the necessary condition for the successful enforcement of the same principle, is at the center of the theoretical argument of this article. The step forward for the principle begins when it is possible to realize the source of the votes not in individuals but in the collegium, or the corporation, in other words in the unitary collective subject. The necessity of this source can explain the exclusion of the principle for the issues (mainly religious) that can provoke deep cleavages in the unity of the subject. In the end of the article the various forms of resistance against the principle (and the rules) carried out by partial or minor «societies» are considered through the so called pluralistic relations, always looking for something close to the principle of unanimity. 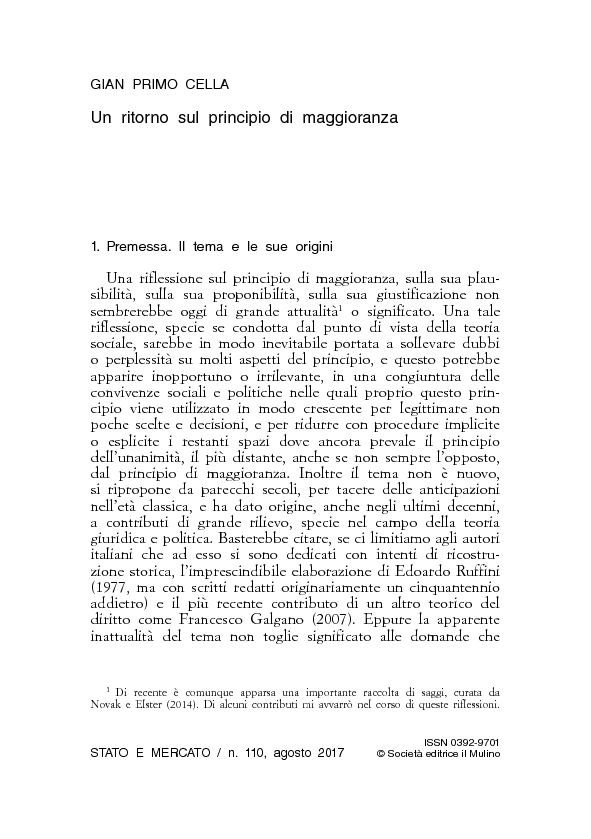