In recent years, the economic literature has highlighted the rising employment risks related to technological change. On the comparative political economy side, exposure to labor market risks has been investigated as a source of preferences for redistribution, but technological change has not been so far framed as a distinctive risk. In this work, we empirically test the hypothesis whereby exposure to a relatively high individual risk of technological unemployment translates into higher support for redistributive policies, which is a precondition for the emergence of political demand for policies geared at protecting workers from lack of income as a consequence of technological change. We test our hypothesis on Italy, using data from Round 8 of the European Social Survey, including unique data on support for minimum income schemes (GMI) alongside universal basic income (UBI), and a measure of subjective (perceived) risk of technological unemployment alongside an objective one based on tasks substitutability (the Routine Task Index). Our results show that higher levels of objective exposure to risk of technological unemployment significantly correlate with support for some income protection measures, GMI in particular, irrespective of perception of such risk. On the one hand, this points to the possible emergence of political demand independent of other risk factors such as labor market status or exposure to globalization. On the other hand, it raises the issue of causal mechanisms (such as social and occupational networks) that translate objective risks in policy preferences. Finally, our results highlight the relevance of a notion of distributive deservingness for popular support of redistributive policies, consistently with the overall functioning logic of the Italian welfare state. 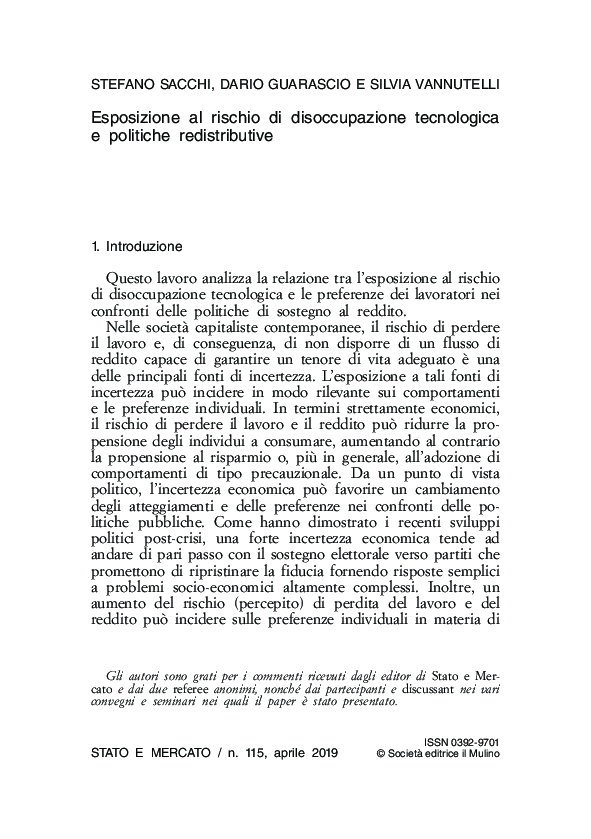