The recent "White Paper" by the Ministry of Labour proposes a substantial reform of the Italian labour market regulation based on two main guidelines: a) to decentralize the wage bargaining process at the regional level; b) to weaken the rules preventing employers from firing their employees. In this work, the policy framework underlying the reforms proposed in there is depicted and their effectiveness is critically assessed in the light of the leading economic literature. In our view, the "White Paper" strategy seems to be aimed to weaken the role of collective agents in the economic system and assign to "atomistic" markets the task of bring into being relative price configurations consistent with "microeconomic" efficiency at firm level. In this work it is showed that this strategy may although give rise to relevant costs in terms of "sistemic" efficiency: in particular, in contrast with the authors' claim, the regulatory framework proposed in the "White Paper" is likely to model an economic environment characterised by a high propensity to destroy "specific" human capital during recessions and to discourage its accumulation during cyclical upswings. Such a regulatory framework seems therefore inconsistent with the target of gaining market shares in the "high quality" segment of the international division of labour, where the competitive performance of home firms crucially depends on their availability of "specific" skills. On the contrary, it may fit very well to a productive specialization model centred on traditional sectors, characterized by poor technology and weak propensity to product-innovation, where cost-efficiency is the main factor of competitiveness. Unfortunately, this strategy would expose our economy to strong competitive pressures from countries with high availability of unskilled labour, thus making necessary either to drive down wages or to accelerate the speed of process-innovation, with a likely adverse effect on employment. 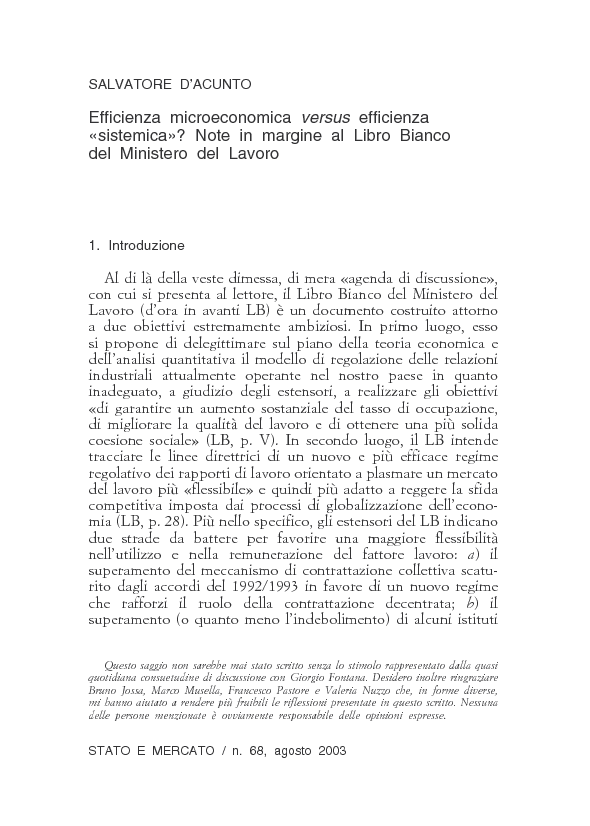