This article examines an aspect of the perfomances of Italian Governments in the last ten years of the so-called "First Republic" (1983-1994). The aim is to observe "if" and "how" the government performance in the policy-making process varies as a consequence of the transformation of the party system. Since the 1980s the degree of polarization has decreased while the degree of fragmentation has increased. In particular, the author wants to verify the plausibility of the hypotesis according to which the high degree of fragmentation causes the continuation, not-withstanding the reduction of polarization, of an unsatisfactory government performance. Therefore, the author makes a quantitative analysis - number of laws approved, number of bills presented, the amount of votes by which the legislation was approved, number of amendments presented and approved, kind of legislative procedure used for approval - and a qualitative analysis - the kinds of laws promulgated - of the legislation in order to estimate the role played by the cabinet in the law-making process. The results of this research show that in the IX, X and XI legislatures an unsatisfactory government performance has persisted, which appears to confirm the impact that fragmentation has on the policy-making process and its outcomes. 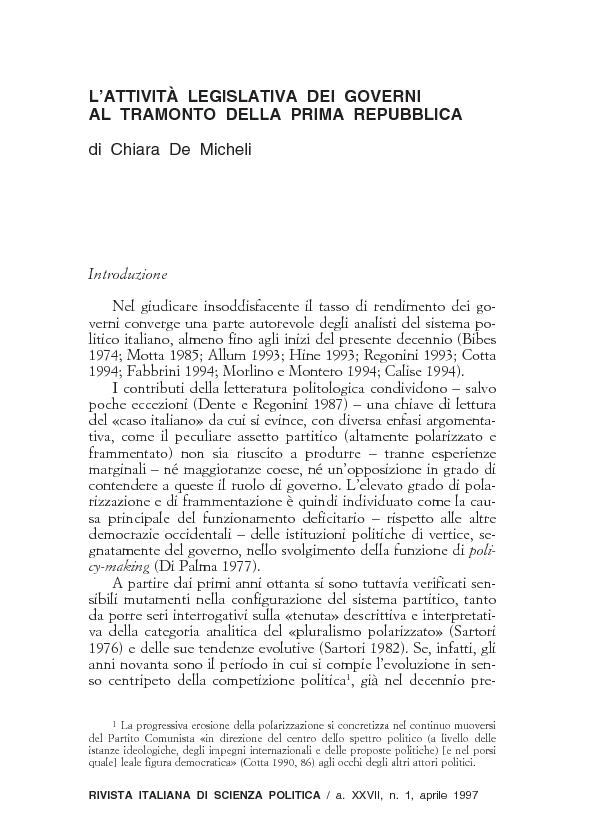