Secession represents a critical issue in the political sphere as well as a serious conceptual challenge to sociopolitical analysis. With secession is at stake the unity of a political community, typically, in the modern world, the unity of nation-State. This essay holds that secession has fundamentally a "political status", even though secessionist movements often appeal to a differentiated set of claims or reasons (cultural, historical, economic). But what does it mean to consider secession as a matter of "politics"? Why does secession conflict is with nation-State sovereignty? Which kind of explanation is offered by the international literature focused on normative and moral dimensions? Which difficulties characterize such an approach? Acknowledging a "right of secession" implies breaking with democratic principles and practices? Under which conditions political movements are identifiable as legitimate secessionist subjects? In order to deal with such controversial questions, the essay suggests to link socio-structural perspectives with the action perspectives and outlines a framework for analysis based on a theory of coercive conflict that calls for a rethinking of some classical political categories and for their reformulation as conceptual instruments by which political analysis can treat secessionism as an enlightening case of divisive political conflict in democracy. Political fight for "recognition" and "political damaging of the adversary" are in such a context crucial keys to understand characters and dynamics of secessionist conflicts through which members of political communities, their mobilizing and representative organizations, decide "who they are" and "who to obey to" - and deal with political collective membership/identity problems and with political obligation problems. Considerations developed here can contribute to throw some light on historical and contemporary cases of secessionism, but also on the secessionism proposed by the Italian "Lega". 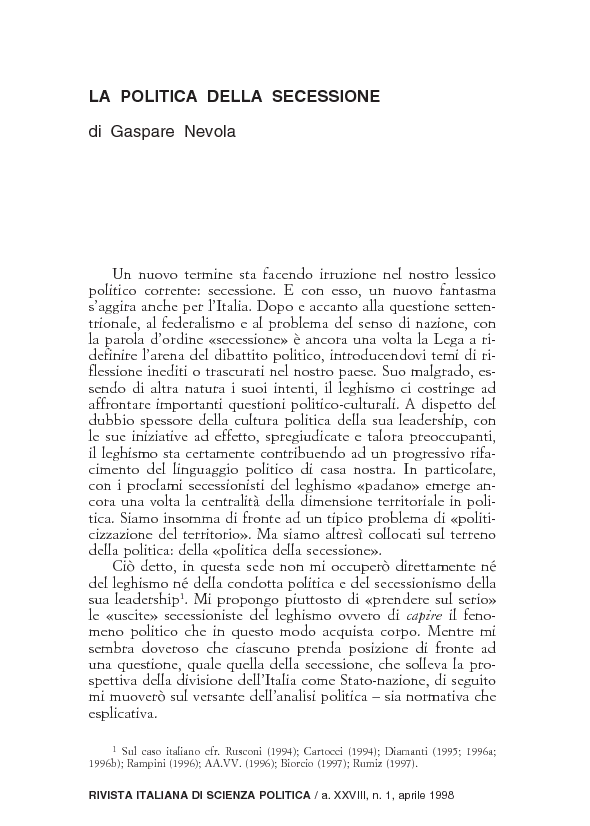