Reviewing the book devoted by Sergio Fabbrini to the Italian transition, the author makes three major criticisms. The first is that the book does not provide a precise formulation of what a transition really is and, therefore, does not satisfactorily identify the beginning of the Italian transition. The second criticism is that there is no attempt to utilize some of the existing theories to explain the Italian case. The reviewer strongly suggests that Easton's systems analysis might be a useful starting point. In fact, in the Italian as well as in several other transitions, the three major components of the political system: the political community, the regime, and the authorities, are significantly affected. Fabbrini does not refer to Easton's systems analysis and makes little use of the theory of the veto players as articulated by Tsebelis. The third criticism refers to the very episodical comparison between the Italian transition and the French transition that led to the Fifth Republic. On the one hand, the reviewer points to the fact that the Fourth French Republic was the most similar case to the First Italian Republic and, on the other hand, strongly suggests, contrary to Fabbrini's conclusion, that the French semipresidential solution might satisfactorily work in Italy as well. In the end, this review article underlines the need for the cumulation of knowledge, for the reliance on existing theories, and for the comparison of whole political systems in order to obtain a better understanding of the transitions to democracy. 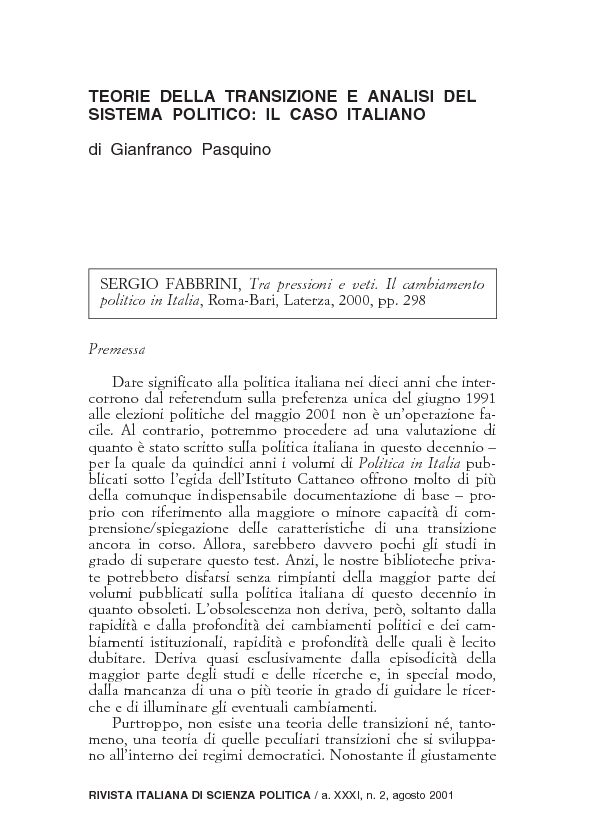