Starting from an analysis of the relationship between cognitive variables (such as the "level of interest in politics"), political variables (the degree of "coalition belonging") and evaluative-affective variables (in particular: individual evaluations of political leaders), this article explores the perception that different segments of the electorate had of Silvio Berlusconi and of his centre-left opponent Francesco Rutelli. More precisely, the analysis first focuses on the degree of popularity of the two candidates and then on the voters' opinions of their personal and political qualities. These two aspects of the candidate evaluation process are taken into account both in relational and diachronic terms. Indeed, the relational analysis concerns the judgments of more and less "sophisticated", more and less ideological, more and less independent voters. Special attention is given to the concept of "coalition belonging" that applies the classic notion of "partisanship" to the new main cleavage in Italian electoral politics: "Ulivo" (centre-left coalition) versus "Casa delle libertà" (centre-right coalition). The diachronic analysis, on the other hand, monitors the evolution of voters' attitudes towards the candidates and identifies four main effects of the electoral campaign: a strong "polarisation" effect, inducing voters to realign along ideological (centre-left vs. centre-right) lines; an "involvement gap" effect, in which more sophisticated voters are more strongly "aligned" with their respective coalitions; a "vedette" effect, in which the two candidates receiving the highest amounts of media exposure gradually increase their degree of popularity; and - with an apparent paradox - a "disenchantment" effect, related to a significant deterioration in the perception of the candidates' moral and political qualities. 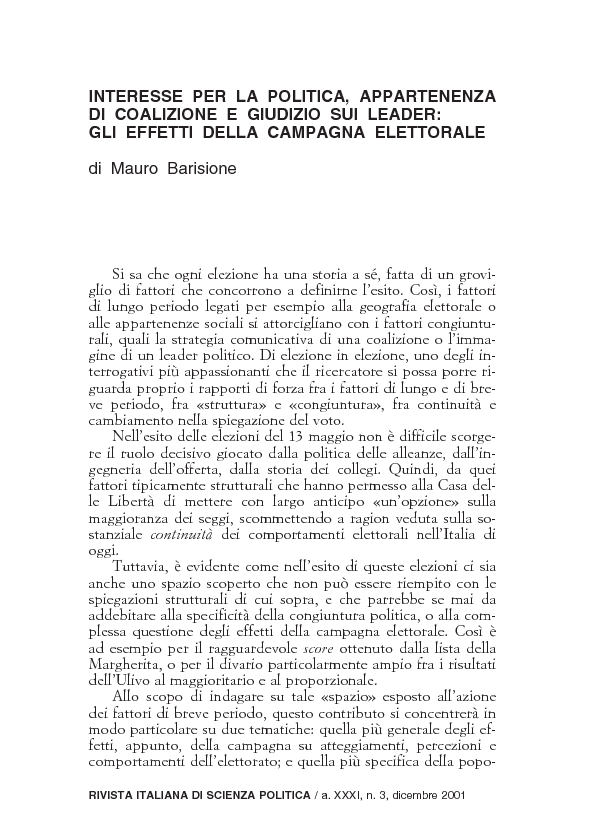