The article provides a systematic assessment of the Italian transition through the results of its three national elections. The analysis ranges from 1994 to 2001 and covers a wide variety of topics. In particular, the residual polarization assumed by the previous literature is found theoretically flawed and empirically disproved. The more recent center-periphery cleavage has evaporated with the demise of the Northern League. The electorate, especially the centrist one, results strongly mobile both on national and cross-national records. Far from being "winning", the political extremes are found stable or losing; parties of the center, in turn, are declining at a faster pace than in comparable democracies, and their numbers are by 2001 among the smallest, whereas they were the strongest ten years ago. As a consequence, the Italian case shows the whole set of the standard conditions for bipolar, centripetal competition, though two problems remain: fragmentation, which might be cured with the electoral reform, but is not the main, nor the most deviant feature, of the present system; and a deep destructuration crisis, whose indicators distinguish more sharply the Italian parties from their European counterparts, and whose effects might be felt for long and significantly depress the systemic performance of the main political actors. 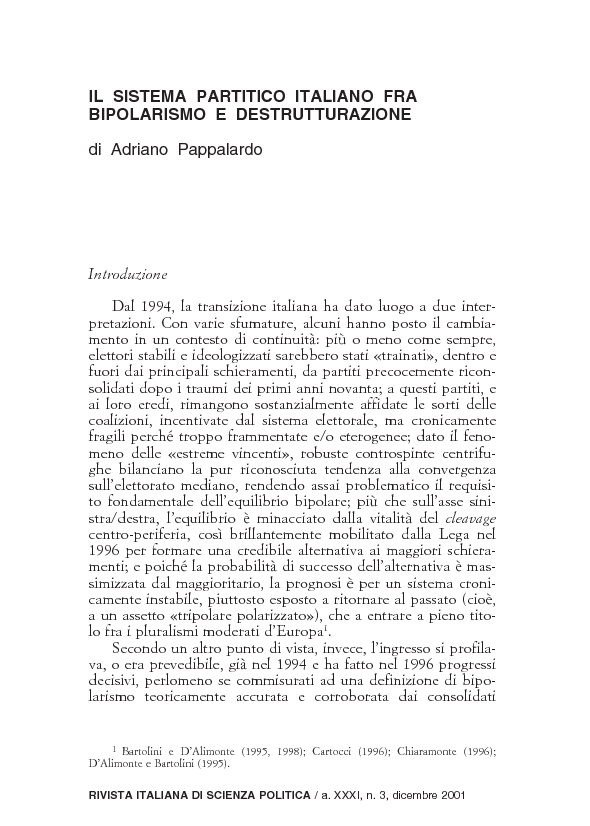