The political role of international theoretical discourse is an essential and most contested issue in the IR contemporary debate. The resistance of traditional perspectives to the inclusion of self-reflective elements on the agenda of international political analysis reflects the inadequacy of their theoretical framework to bear with the ambiguous relation between political and theoretical discourse. I argue that metaphorical analysis has the potentialities to offer both an important self-reflective contribution to IR discipline but also to discard its theoretical boundaries - as defined by positivist and neo-positivist assumptions. Political metaphors establish meanings that frame both political and theoretical discourse. The distinction between these two, albeit possible on analytic ground, is in practice much less tenable and the cognitive representations of each commonly spill over to the other. Once metaphorically established, the meanings attached to these representations play a role that is both influential and latent or, more precisely influential "because" latent. The analysis of political metaphors offers the opportunity to shed some light on, expose and investigate the latent meanings that theoretical discourse assimilates from political discourse and vice versa. However, the theoretical requirements of metaphoric analysis are not compatible with the main assumptions that constitute the theoretical framework of IR traditional perspectives. In the second part of the article, I present the reasons why metaphoric analysis, while comfortably adaptable to critical and constructivist research programmes, does indeed "threaten" IR disciplinary boundaries - as defined by the realist, pluralist and structuralist triad - but it also offers the opportunity to expand them towards grounds that appear more acceptable both socially and theoretically. 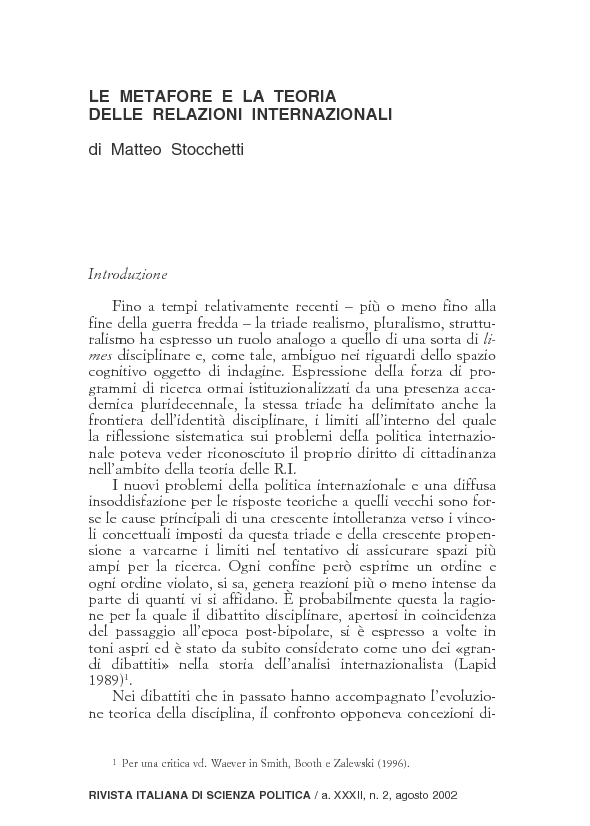