This article is an edited version of the invited lecture read by the author at the 50th Annual Meeting of the Italian Economic Association. Its subject is the views entertained by a number of eminent Italian economists on the international economy in the XXth century, and of the place Italy should have in it. Accordingly, from Costantino Bresciani Turroni's analysis of pre world war one Mitteleuropa and Marco Fanno's early criticism of ricardian comparative advantage, both within the tradition of the «Germanist school» of economists very strong at the University of Padua and in important institutions like the Bank of Italy, attention is shifted to Luigi Einaudi's views on the economic analysis of the debt bubble preceding the Great Depression and of its similarities and differences with post-1945 inflationary episodes, as highlighted by Sylos Labini. After mentioning Franco Modigliani's criticism of the theory of comparative advantage in the light of economic history, written before he was forced to emigrate to the US by Italy's anti-semitic legislation of 1938, the views on post-war stabilization policies in Italy and the USA entertained by Bresciani Turroni are recalled. Marco Fanno's and Giovanni Demaria's prescient pessimism on the final outcome for Italy's economy of European economic integration in the 1950s is reported, and its rigorous analytical foundations are noted. The profound transformation undergone by Italian industry in the 1970s and 80s is recalled, and the focus is placed on its analysis by eminent Italian economists, emphasizing the diverging views of Graziani, Becattini and Fuà. 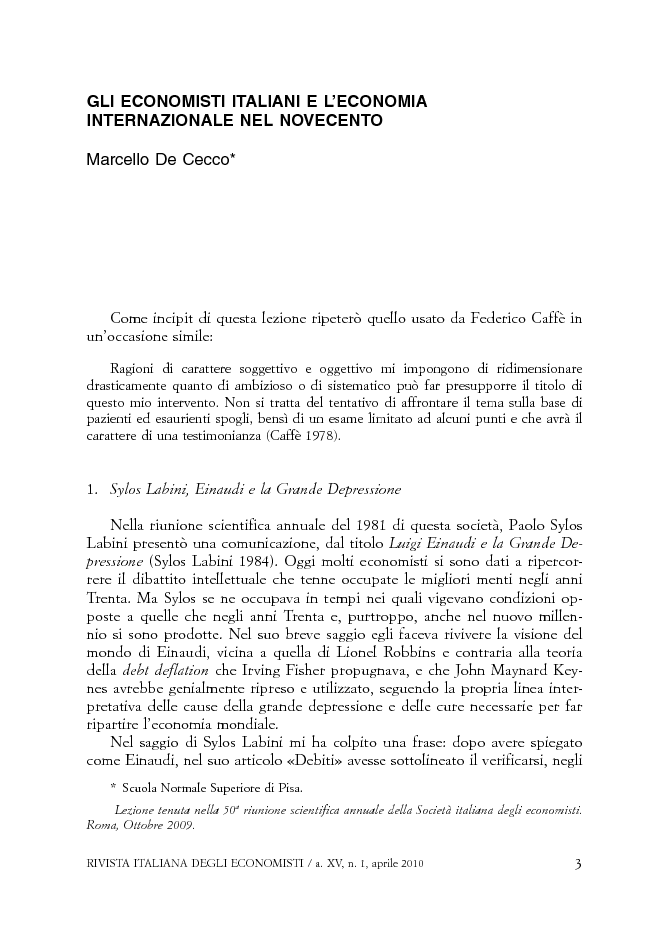