Pension systems, in Italy and elsewhere, are currently under stress, because populations are getting older and economic growth rates are slowing down. This article sets out to present the guidelines of a possible reform scheme, based on a number of elements which appear to be relatively new in the literature, and notably: 1) reference to a long-term population structure (so as to attenuate possible, and actually frequent, short-term imbalances); 2) identification of two groups of recipients (the demographically dependent, either young or old); 3) choice of the relative income to be allotted to the dependent (relative to what the average worker is left with, net of the payroll tax). The proposed system is shown to possess a number of desirable characteristics: equity, long-term financial equilibrium, constant payroll pressure, constant relative welfare of the parties involved (young, adults, old), capability of self-regulation to varying demo-economic scenarios and, therefore, independence of demo-economic forecasts, incentives to fertility, and, not least, an extreme simplicity, both of its general principle and of its practical applications. Also, several consequences emerge from the discussion: for instance, that a transfer system is a combination of choices and constraints, mean age at retirement being only one of at least three possible instrumental variables. Also, it is shown that it makes little sense to try to define exactly and once-and-for-all the rules of the pension system, because a constantly increasing mean age at death is likely to outdate (almost) all calculations very soon. What may be done, instead, is to link these rules to the characteristics of the life table prevailing in each period, so as to preserve the spirit of the transfer system, and its financial balance, in a wide range of possible actual situations. 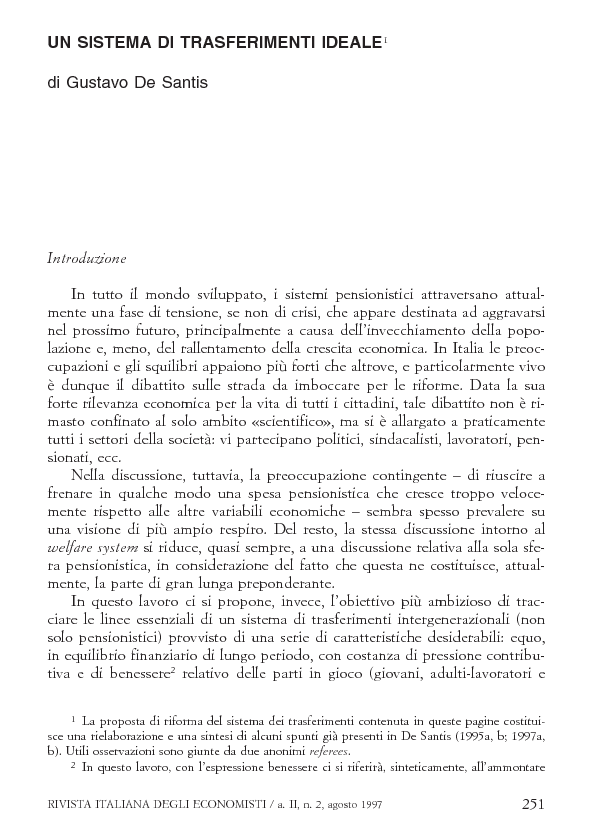