The aim of this paper is to investigate the main structural characteristics of the Italian technological system (TS) in the period 1980-1990. The analysis is carried out by considering the TS as a set of interrelationships among four constituent sub-systems: the hard core of technological and scientific knowledge, the production sub-system, the market and the institutional interface. Following an intersectoral perspective, the interrelationships within and between the sub-systems are proxied by building up consistent innovation flows matrices. The structure of the TS and its configuration are then investigated by applying to such matrices suitable network analysis indicators. In particular, two sets of matrices are constructed. One set (for 22 sectors and four years), based on total R&D sectoral expenditure, allows us to investigate the techno-economic core of the TS, with a particular emphasis on the relationships between the three main partitions of an economic system, i.e. primary, manufacturing, and services. Another set, smaller than the previous one (covering 13 sectors for three years), but still consistent with the former, uses R&D sectoral expenditure by source of funding (i.e. private, public, and foreign) to integrate the analysis of the core with that of the two remaining sub-systems, i.e. the institutional set-up and the foreign market. Among the main results of the paper, the most remarkable is the evidence of a structural change for the Italian TS between 1982 and 1985, signalled by a consistent increase in its connectivity degree, while afterwards a certain degree of maturity is suggested by a decrease in the techno-economic coherence. Such results take on different specifications depending on the size of the retained innovation flows, and of the kind of economic branch which is considered. At the sectoral level a three-fold partition emerges by looking at the pervasive/dependent configuration of each sector: a "supercore", constituted by the chemical-pharmaceutical sector, an intermediate core, made up of electrical appliances, public utilities, and research centres and services to firms, and a peripheral core, mainly containing resource intensive sectors. The analysis of the oriented graphs correspondent to the innovation flows matrices shows that these three partitions are quite disconnected, both within and among them, and that the electronic sector turns out to be (opposite to what expected, and to what is in other countries) dependent rather than pervasive, and quite disconnected from the rest of the TS. Another important result concerns the structural change observable within the services partition, in particular as far as the commerce, insurance, and credit sector is concerned, which turns from dependent into pervasive from 1982 to 1985. Interesting results also emerge from the analysis of the complete TS. Both the public and the foreign sector enter the analysis with an outward centrality which is above the average, although that of the former decreases and change its target sectors over time, while the latter appears more stable. Both these two sub-systems pervade, in addition to high-tech and resource based sectors, typical sectors of international competitiveness, confirming their relevance for the Italian TS. 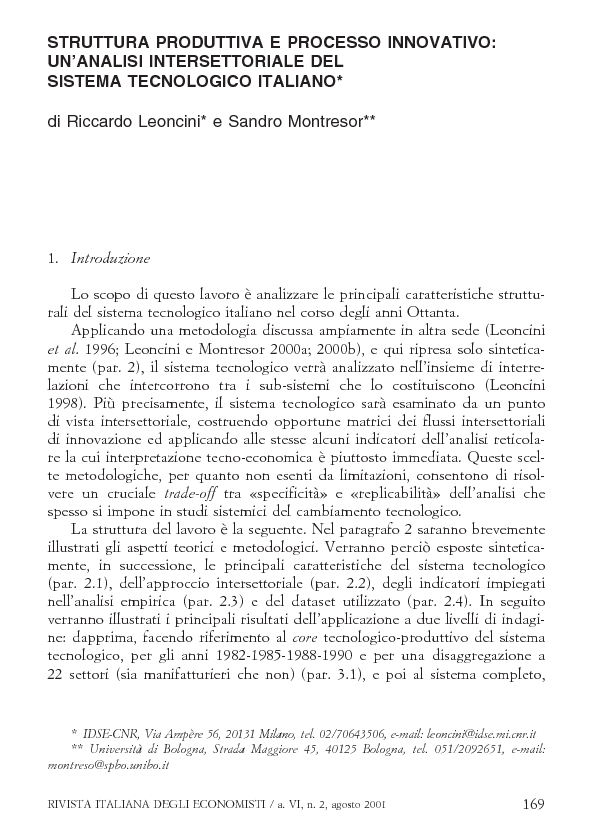