Giuseppe Toniolo must be recognised as one of the leading Italian economists animating the debate on the role of credit at the turn of the XIX and XX centuries. While his contribution was limited on theoretical grounds, it must be acknowledged that his strong reference to ethics conferred a novel and heterodox colour on his work. Toniolo accepted the view of money as goods and the bank as intermediary but, in his criticism of capitalism coloured by Catholic ideals, he did not fail to underline the risks involved in permitting capital to gain dominion over labour and therefore over man. The central role of ethics in Toniolo's work emerges clearly from his analysis of income distribution and the definition of interest rates. He criticised Böhm-Bawerk's theory of capital and interest, suggesting that the latter attributed an intrinsically productive value to capital. Some of Toniolo's reflections regarding speculation are of undoubted interest today for their modernity. If Catholic morality had placed man and labour at the centre, the new social and economic order, he observed, had made capital the protagonist. Such a change had paved the way for usury, speculation and monopoly. Toniolo underlined the fact that the economic system no longer favoured the expansion of productivity and social wealth, preferring rather to encourage financial speculation. It was therefore essential in his opinion for capital to re-assume its original role, so as to be no longer a cause of crisis and change in income distribution. Toniolo called on the banking system to fulfil an important task for the progress of social economy, not however without a drastic renewal of both its operators and its instruments. Emblematic of Toniolo's approach is the central role attributed to the banks, especially the people's cooperative banks, in order to remedy a number of financial crises threatening the Italian economy of his time. 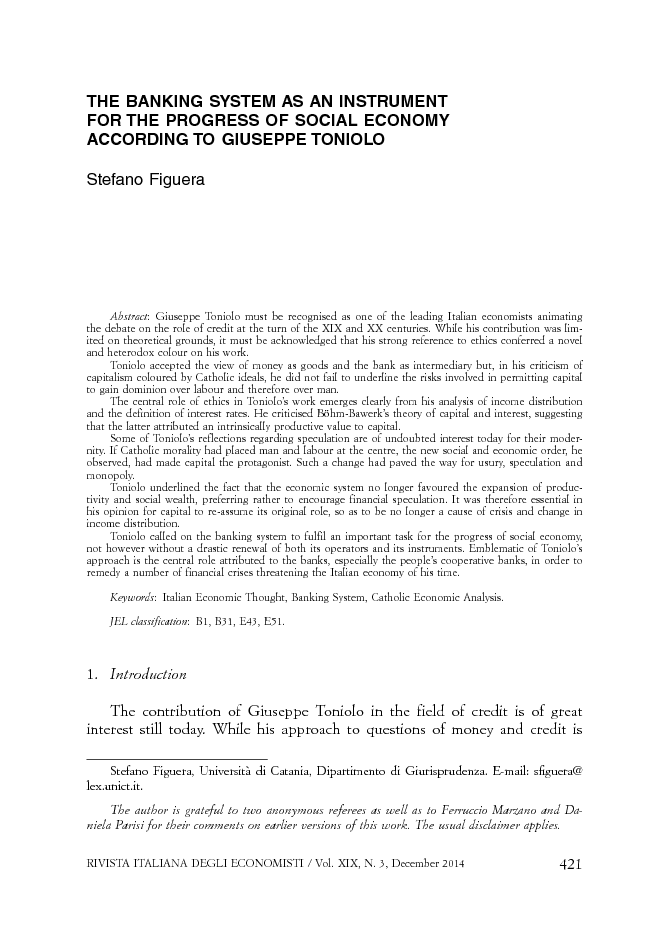