As far as recent developments in economic theory are concerned, "Behavioral Economics" constitutes one of the most promising frontiers in the last ten years, as the Nobel Prize for Economics recently won by the social psychologist Daniel Kahneman and the prestigious John Bates Clark Medal granted to the young economist Matthew Rabin testify. It is then worth asking the following questions: what is, exactly, Behavioral Economics? What are the reasons behind its recent success? This survey aims at providing a first answer, both directly and indirectly, to such questions, by illustrating the main contributions developed within such ambitious research program. Behavioral Economics aims at increasing the explanatory and predictive power of economic analysis through an increase in the degree of realism of the assumptions at the basis of economic models, i.e. by means of a greater and greater integration between economics and psychology (but also between economics and social sciences such as, for example, cultural anthropology). While standard economics assumes that agents are driven by well-defined and stable preferences and act rationally, psychology reveals that it is often the case that such assumptions cannot be taken as an adequate and satisfactory description of human behavior. In this light, Behavioral Economics focuses on markets where some (if not all) economic agents involved make choices which appear to substantially deviate from traditional economic predictions. In this survey we focus on the following two fields of studies within Behavioral Economics: a first field deals with the main cognitive limitations affecting economic behavior (Sections 2 and 3), whereas a second one is related to the role of the so called "social preferences" (Section 4). Both areas aim at incorporating the major results obtained both experimentally and empirically into formal economic analysis. Within the first area, it is assumed, analogously to neoclassical models, that agents act according to the self-interest hypothesis, but also that "rational" behavior is affected by several cognitive limitations (in line with classical contributions on bounded rationality; see, in particular, Simon 1978; 1979; 1992). By contrast, the second area departs from the neoclassical approach by introducing modifications at motivational level. Unlike traditional analyses, social preferences studies focus, at both theoretical and experimental level, on interaction scenarios where players act not on classic selfish preferences but on different types of social preferences. In other words, it is still assumed that individual behavior is rational, but also that various forms of non-selfish rationality get into the picture. In particular, behavioral choices by individual agents (as well as their objective functions) can be (either positively or negatively) affected by "other players'" preferences, intentions, material outcomes and/or behaviors. 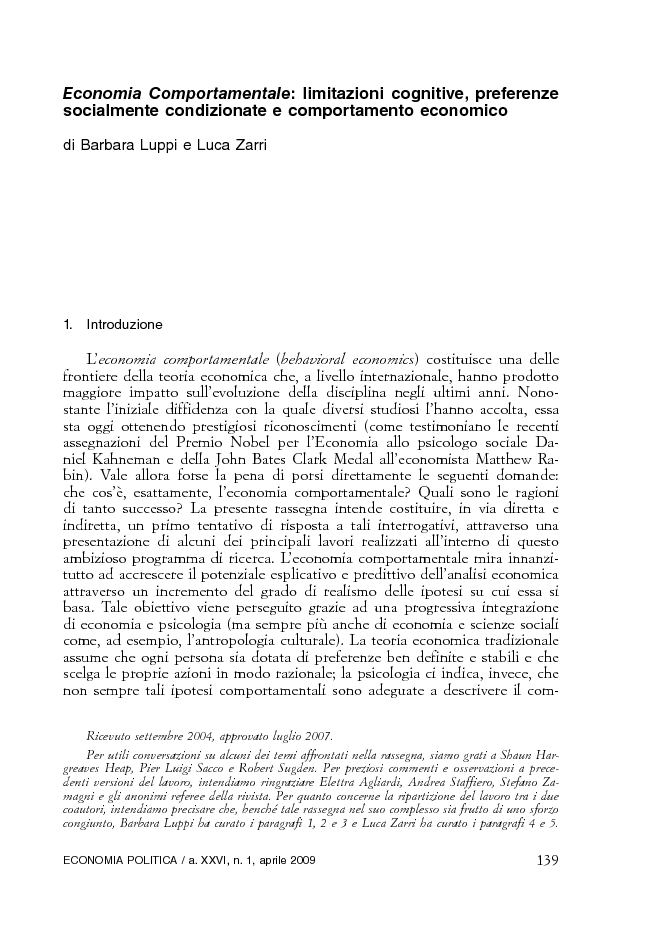