In the second half of the 20th century, the crisis of positivism led to the rise of new directions in the philosophy of science. In the same period many economists expressed an increasing dissatisfaction with the so far dominant economic paradigms. The aim of this paper is to point out the relation between the main trends in the philosophy of science and the debate on the nature and the method of economics. The paper will review the main thesis of logical empiricism, proposed by Hutchison as research guidelines in the field of economics, and the transition from verificationism to Popper's falsicationism. It will then examine how the empirical-deductive method of positivism was interpreted by Friedman and Samuelson, who many consider the main exponents of neo-classic economics. With Kuhn and Lakatos, the emphasis of the «new» philosophy of sciences shifts from what scientists «should do» to what they actually «do» in the research practice. Another important evolution occurs with the works of Feyerabend and Rorty and the emergence of «post-modernist» trends, which deny any a kind of epistemology and maintain that a theory is acceptable only inasmuch it is endorsed by the scientific community. The relation between these radical changes in the philosophy of sciences and the debate on the methods and status of economics is complex. Heterodoxes economic theories, wishing to address the crisis of mainstream economics and the «economists' uneasiness», do not imply a refusal of positivism, and «post-modernist» approach had a limited appeal among economists. The paper presents the contributions of McCloskey and Rosenberg, two economists who particularly developed the arguments against positivist epistemology applied to economics, but it observes that, if interesting, such ideas do not provide a solid enough basis to overcome neoclassical orthodoxy. The conclusions briefly examine a still evolving and promising research approach, the «critical realism» recently promoted by the «Cambridge Group», which links criticism to the empiricaldeductive method with the proposal of alternative economic theories. 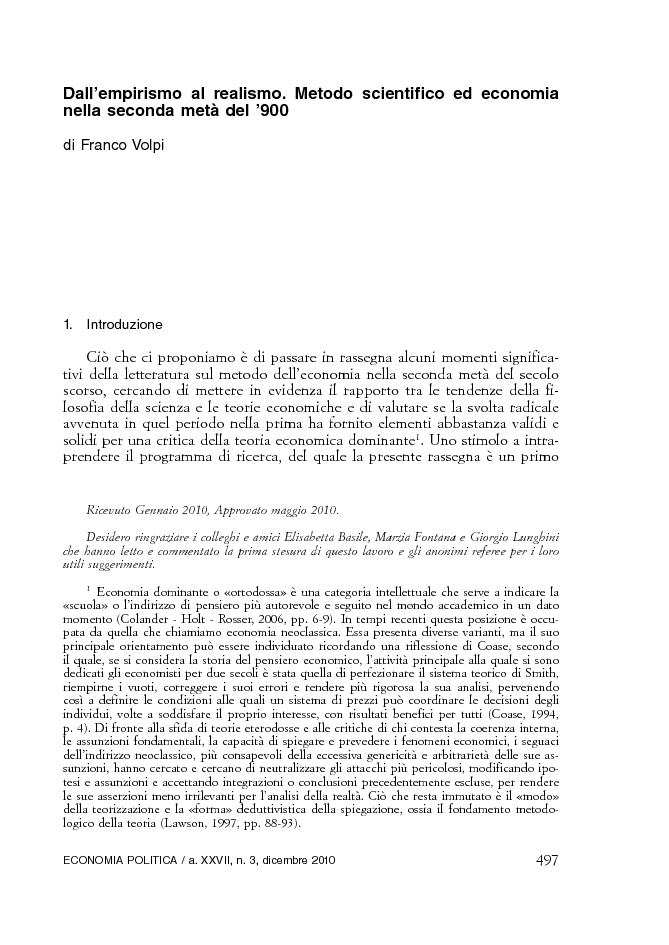