Using time-series and panel data methodologies, the paper analyzes the existence and shape of the «BARS curve» (Barro, Armey, Rahn, and Scully) for EU countries in the period 1970-2009, connecting the size of Government (measured by the share of public expenditure on GDP) to the rate of economic growth. Individual countries research has been conducted for twelve EU countries for which enough data were available, while panel analysis has been performed both for EU-27 and for some sub-groups, distinguished by their different socio-economic and monetary structures, and per capita GDP. BARS curves were generally found, and the shares of actual public expenditures generally exceed substantially those related to the maximization of GDP growth. However, great differences emerge. For the 12 countries examined by time-series techniques, the difference between the actual level and the peak of the BARS curve ranges from 2.3 points for Ireland and 18.1 points for Belgium. Similar situations were found in the panel analysis, with a smaller gap for the Anglo-Saxon countries in comparison to the Western Continental countries. For low per capita GDP countries the peak is higher than for the mature economies. Moreover, we found a long-run relationship between real GDP and public expenditure for six countries, while Granger-causality tests suggest different flows of direction for each country. So, further research may prove useful to shed light on the disparities emerging in the empirical analysis of individual countries, as well as within panel sub-groups. Results in the paper highlight that European countries are very heterogeneous in terms of the peak of the BARS curve. This evidence leads to an interesting question, i.e. if the fiscal adjustment should be the same for all the states or it should depend on the weight of the public sector on GDP in each country. 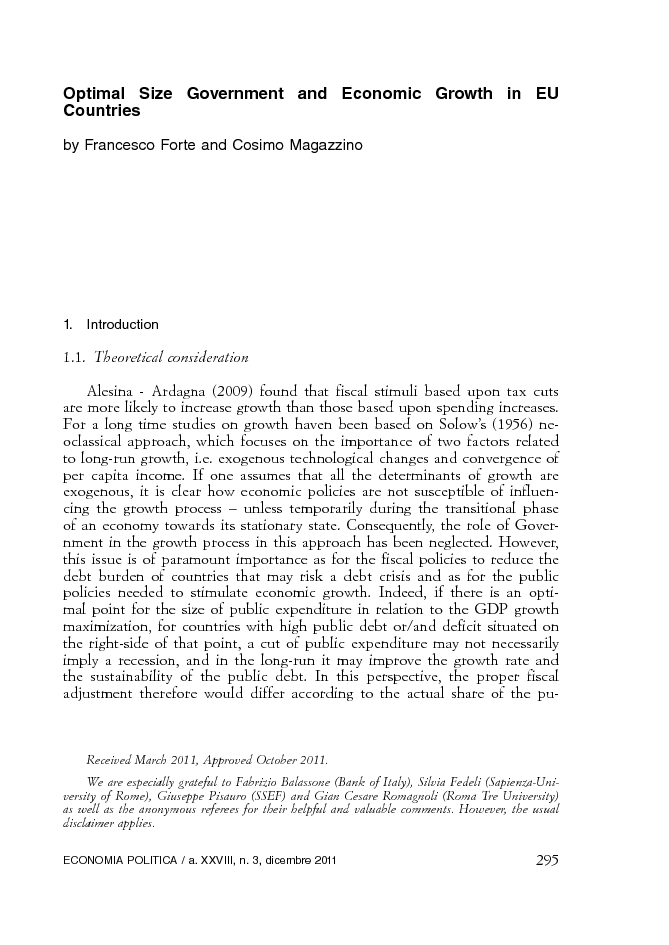