This paper aims to examine the effects of the Negotiated Planning in Italy in the last decade, with particular attention to the impact of funding related to the Territorial Pacts on beneficiary firms. The literature is divided into different analyses on the effects of the «new Italian economic planning». The first and more drastic argument is attributable to the idea of the failure of Negotiated Planning, coordinated since 1999 by the Department for Development Policies of the Ministry of Economy and Finance (Rossi, 338 2005; De Blasio - Lotti, 2008; Accetturo - De Blasio, 2011). In response to specific additional investment flows addressed to the South of a significant amount, distances North-South were not reduced and especially the enormous effort of the new season of the decentralized territorial policies showed radical methodological limitations and results, with negligible effects on economic development and on employment of the involved areas. The second theory emphasizes instead the presence of «positive signs» in economic dynamics of the South in the last decade, while recognizing the need of some major revisions in content and practices of development policies (Viesti, 2005). However in the economic empirical literature there is a lacks of comprehensive assessment of the effects of Territorial Pacts concerning complete data on disbursements to firms, investments, performance of funded firms. The paper aims to fill this gap. The methodology used for the assessment is consolidated in literature of public policy evaluation, and in particular the implemented instruments are the difference-in-differences analysis and the matching analysis. Two reasons for caution in interpreting the results has to be pointed out: first, that the assessment of the effects of Territorial Pacts is much broader than the analysis of the performance of the beneficiaries and generally concerns the territorial development of eligible areas, the institutional learning and the capacity to cooperate, and secondly the impacts of incentives on firms also derive from anticipatory effects when incentives accelerate investment processes already programmed. 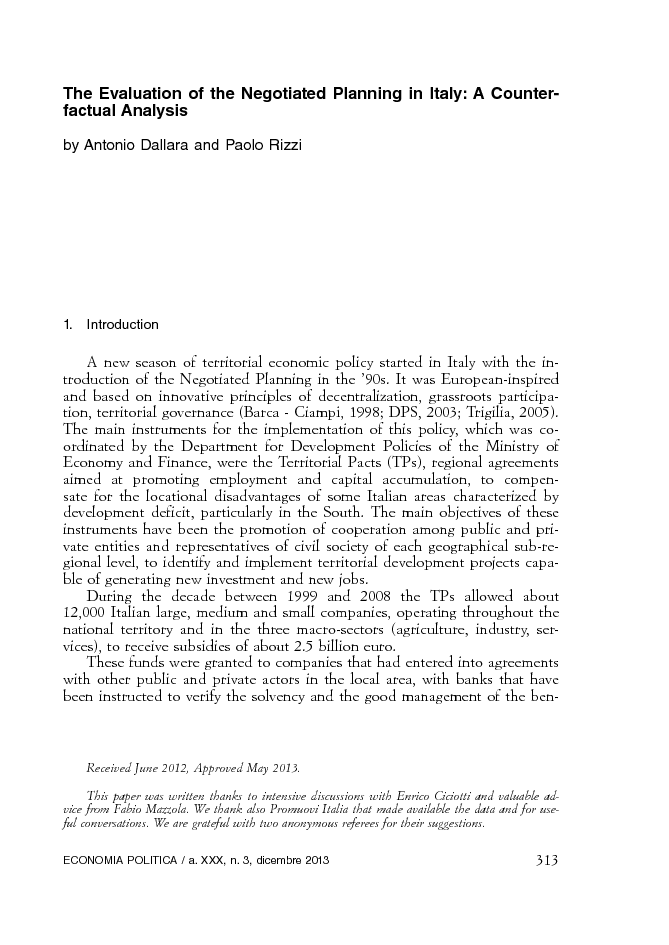