An important issue of the IRPEF (the Italian personal income tax) is the erratic marginal tax rates, that for the middle-class incomes reach 61%. The cause is to be found in the overlapping of different tax credits and the IRPEF bonus which are decreasing with income. We propose to replace the labour income tax credits, that are not available for low-income taxpayers, and the IRPEF bonus with a unique tax credit of ¤ 1,840 for all tax- payers with an income lower than ¤ 55,000 together with a negative income tax. Through a micro-simulation, we show that considering revenues recovered from the abolition of different labour income tax credits, the IRPEF bonus and part of the tax-expenditures, the introduction of the unique tax credit would cost about 9 billion euro. This amount would be enough to finance the negative income tax while the disposable income of taxpayers with more than ¤ 8,000 would remain almost unchanged. Our proposal, without the negative income tax, would come at zero cost and it would correct the erratic marginal tax rates. The reform would stimulate low-income labour supply and file tax returns for undeclared work. The negative income tax, moreover, if well integrated with the Citizens’ Income (the Italian guaranteed minimum income), could solve part of the problem of the poverty trap due to the Citizens’ Income in Italy 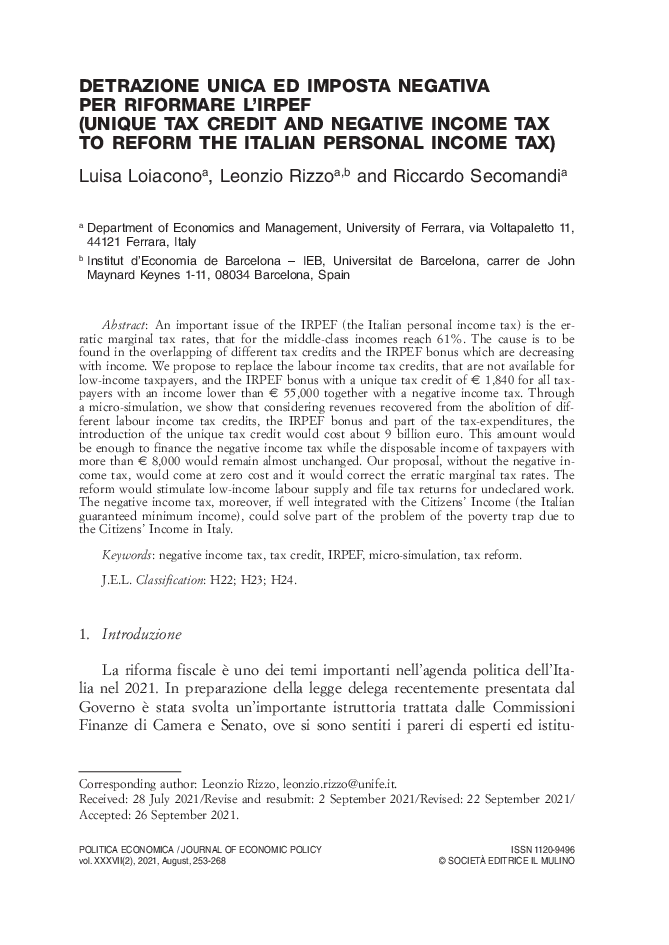