By relocating both multinational corporations subsidiaries and small-medium enterprises between territorial systems, globalization and digitalization are driving a substantial restructuring of world economy. Despite its expected disappearance, incumbent territorial systems are witnessing a time of deep transformations due to industrial relocation processes from Western to Eastern geographical areas. While many cases concern Asian countries as destination territories, in this study only European countries are considered. Such industrial relocation processes often determine the birth of new specialized territorial systems, like industrial clusters or districts, in the destination countries. Various forms of knowledge creation and transfer are involved as determinants and consequences of these processes. Industrial relocation implies also the relocation of different types of knowledge, which occurs through different "vectors": people (entrepreneurs, managers, employees) and goods. In order to well understand causes and effects of industrial relocation, the economic, technological and knowledge aspects should be jointly examined. A special attention should be put on the following differences: between explicit and tacit knowledge; between knowledge internal and external to single firms; between technological and organizational knowledge; between local, national and international source. Many authors argue that, especially in territorial systems, contextual knowledge is a fundamental source of competitiveness, and that this type of knowledge is mostly tacit. Moreover, this source is largely channelled through people's mobility among cluster firms and personal networks. The second distinction focused in this study addresses to firms types of communication sistems, which significantly affect strategic behaviour and absorptive capacity. Field research concerns 163 firms distributed over 6 industrial clusters in three Western European countries (Germany, Italy, and UK). Specific distinctions and hypotheses regard firms in terms of: size, proximity degree, type of internationalization, and digitalization degree. The methodology prevalently employed is hypothesis testing through both standard and multi-dimensional statistics. Main findings show that digital divide between small and large companies and the crucial role played by technological complexity and communication means. Other results cast some doubts on the socio-cognitive view of industrial clusters, because firms assigned law values to local external kwnoledge. 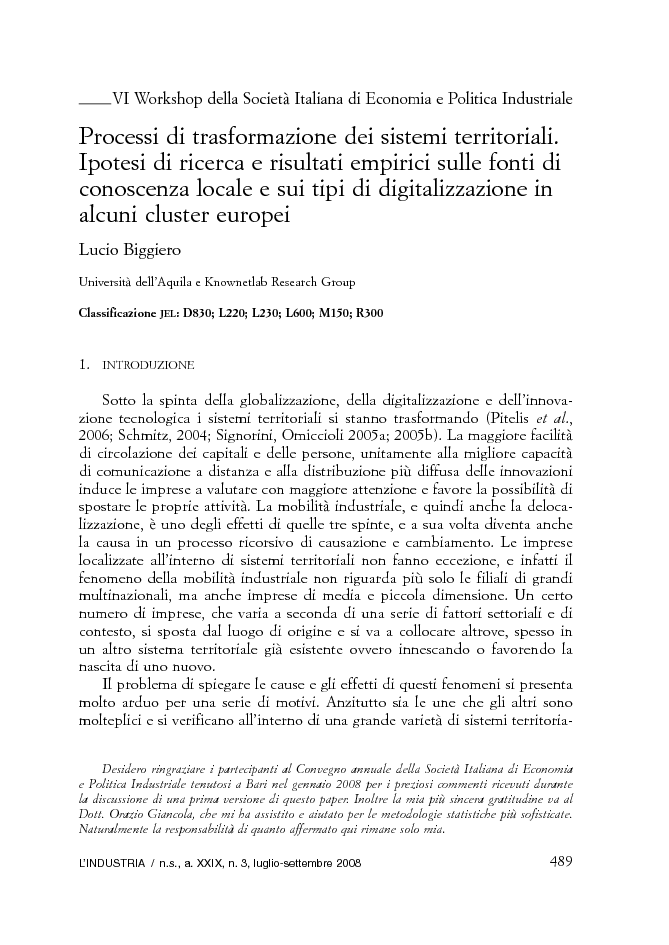