The present paper explores the debate on industrial policy, briefly drawing upon theoretical arguments which call into question the role of the state in mediating and regulating the process of industrial development, to then focus on the experience of the Indian subcontinent and on the automotive segment in particular. Indeed, even pursuing the target of progressively liberalising the industrial sector in order to align itself with international standards and make its industry globally competitive, the country followed a very particular path, which can be hardly compared to any other emerging economy. Tracing the historical evolution of India's industrial policy regimes, this paper argues that it was actually through the planning experiments and the slow pace of reforms that the national industrial basis was set, and that significant industrial growth could later be achieved. As in the case of production organisation and of the implemented labour regime, even in terms of industrial policy the Indian auto sector performed an interestingly precursory function, somewhat anticipating trends that have more slowly affected the whole economy. In the final part of the paper, the potentially leading role that this segment can play within Indian economy is analysed. After highlighting major features and recent trends which have lately characterised the automotive segment overall, factors of competitiveness, constraints, and main challenges faced by the auto industry are discussed, eventually advocating a sounder institutional setting, especially tackling environmental and labour issues. 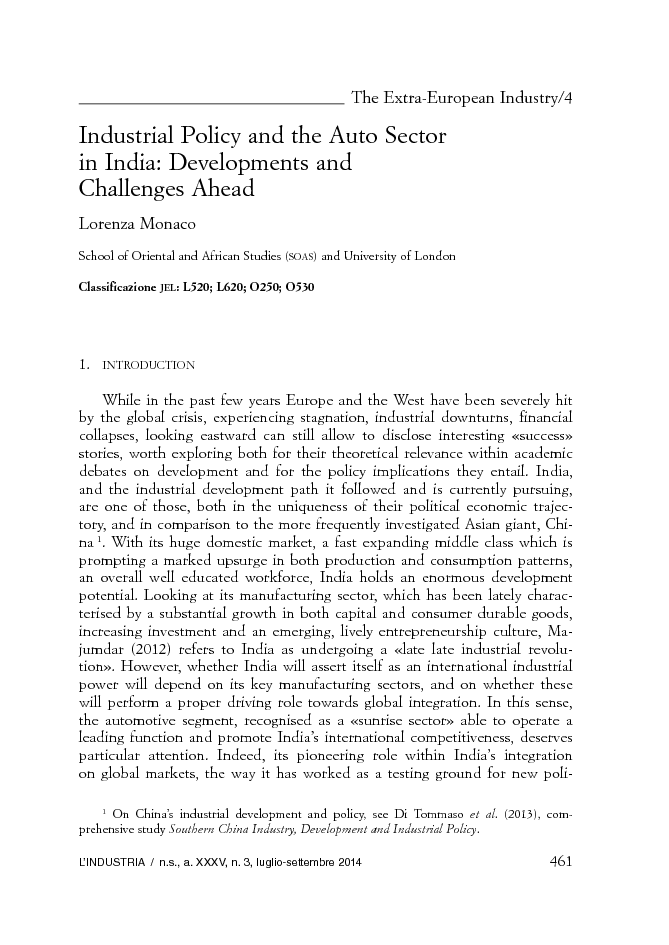