This paper examines and compares the profiles of female and male nascent entrepreneurs (nes) in some selected European countries during 2001-2010 using data from the Global Entrepreneurship Monitor. We test the role of individual and venture characteristics on nes according to the Gender Equality Index (GEI), as reported by the European Institute for Gender Equality. Our results show that the key factors for differentiating NE profiles according to gender seem to be mostly related to the characteristics of the start-up and not to their personal attributes. In countries with the highest gender equality, female entrepreneurship loses its necessity-driven nature which, instead, is maintained in countries where gender equality is lower. Postgraduate education only differentiates female from male nascent entrepreneurship in countries with the lowest gender equality. This seems to indicate that in countries where gender equality is still an issue, having achieved a postgraduate degree might foster female entrepreneurship. This sheds light on an interesting future debate in the policy arena, given that gender equality may be not only an issue pertaining to equal opportunities but could be extended and enforce female awareness to cover relevant positions, thanks to spontaneous and pre-established mechanisms led by top-down approaches. Often the concept of «egualitarianism » is seen as a kind of slogan for a future parity of opportunities, rather than gender parity being considered as normality now. Consequently laws and practices should already be in place to help women to start up a new business. 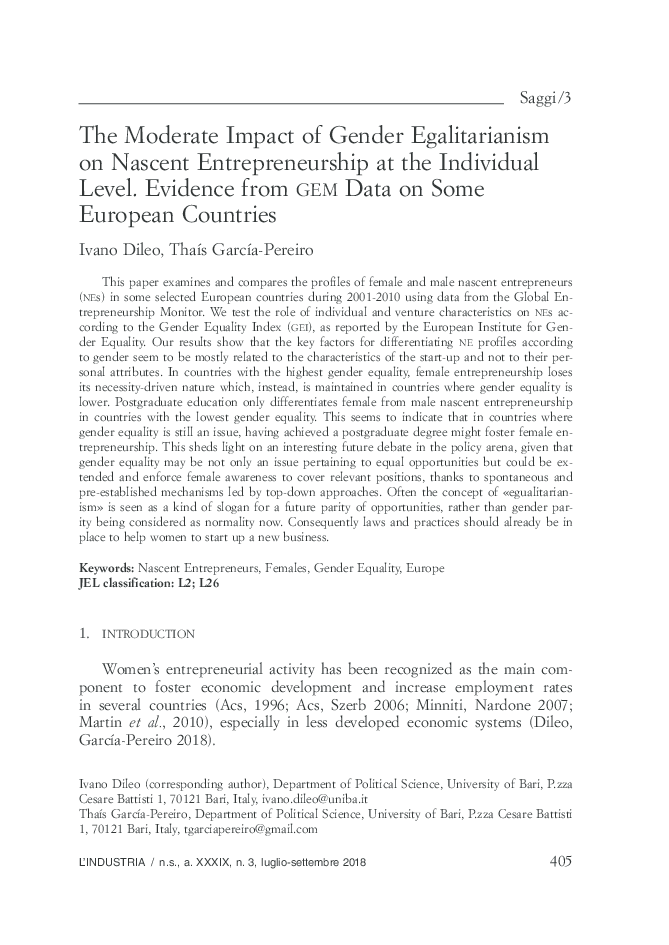