Italy, like other advanced economies, is in the midst of a profound transformation of the production system. At the heart of these processes are two long-term shocks: exposure to competition from emerging and newly industrialized countries and exposure to new digital technologies (ict and robots). Starting from the works of Acemoglu and Restrepo (2017) for the United States and Dauth, Findeisen, Südekum and Woessner (2017) for Germany, an empirical analysis of the impact of digitalization and globalization on the employment dynamics of the Italian local labour markets (sll) is proposed. To this end, a database has been built that unifies the structural data on Istat slls for the period 1991-2011 with data on robots from ifr (International Federation of Robotics). The database integrated the data on investments in ict technologies, provided by eu-klems, the data relating to the trade flows of wits (World Integrated Trade Solution, World Bank) and, lastly, comtrade (un) data. The analysis highlights two results. The first result is that, in the recent history of Italian economic development, the fall in manufacturing employment is due to a much greater extent to competition from emerging and newly industrialized countries compared to the digitization process. The second result is that both in relation to digitization and in relation to globalization the effects on the whole country are far from homogeneous. The effects are spread across the territory according to the different exposure and the different characteristics of the local productive system that suffer the two shocks. In this sense, slls are the necessary tool to understand who wins and who loses. 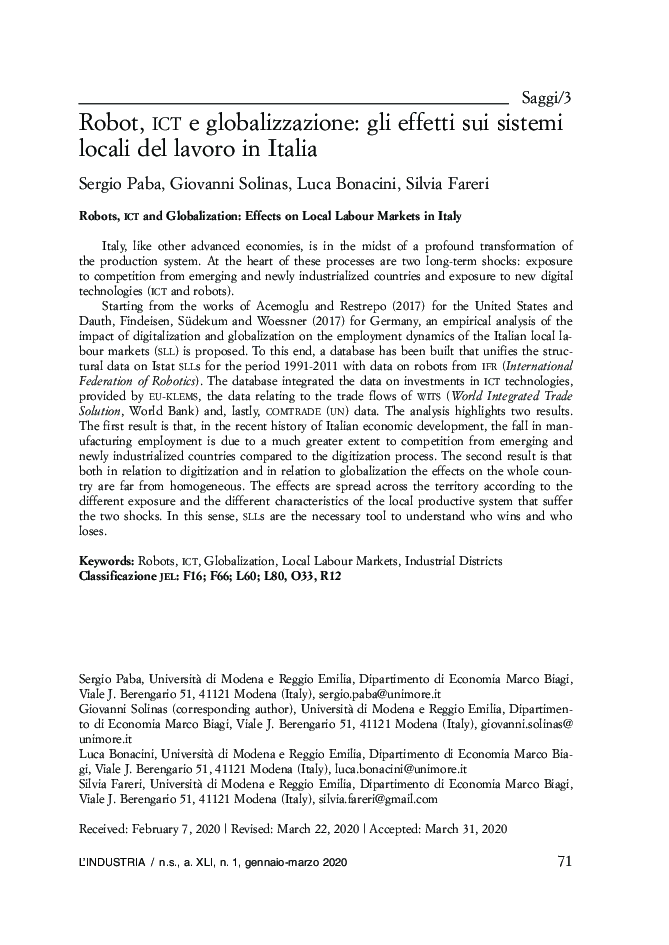