Economic crisis is a recurrent reference in recent analysis of consumers. The present study, referred to Italy, focuses on the period 2009-2010 and aims at analyzing: 1. consumers' perceptions about the crisis; 2. consumers' reactions to it. The study has a descriptive-explorative nature and analyses the data of a continuative monitor of Italian consumers' perceptions and orientations (Social and Consumption Climate - GfK Eurisko) that started in 2001. This monitor is articulated in four waves by year. Each wave consists in 1000 telephone interviews based on a structured questionnaire. Samples are representative of the Italian population (over 18 years old) as regard to age, gender, geographical area and education. Results show that: a. Recent consumers' perspectives about the economic crisis are fairly independent from (even greatly discrepant with) the macro-economic scenario. b. Recently (2010), a new representation of the crisis emerged, not linked to the financial one (Us, September 2008). The «new crisis» is lasting, with a length that requires deep revision of consumption patterns. c. Signs of this revision of consumption patterns are visible in three directions: revised quantity of consumption; re-negotiation of consumption priorities (from «owning» to «usage com-petence»); extension of the consumption value from the «individual-private» context to the «social-public» one. The opportunity of furthering the study of crisis from the consumer's perspective, also in the light of the emergent revisions of the consumption patterns, is discussed. 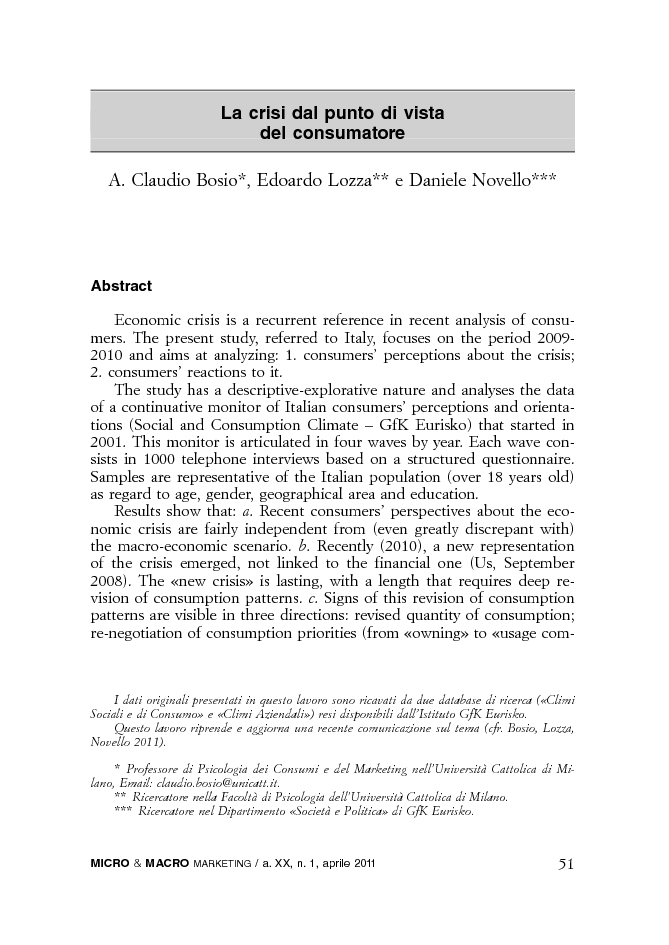