The history of Apple is quite clear in its strategies and trajectories about competition in the global techno-media towards a radical evolution of multimedia devices as an eco-system with the transformation of a user's evolved, educated and socialized by the global community for sharing data, information and knowledge encapsulated in a proprietary model (almost) closed. The main focus is a large connecting trajectory of technology and content, with a global community of users. A story of success so far focused on a "trim" as simple as unusual from a competitive point of view. An integrationist model and additive built around pairs evolutionary hardware, software, portable devices, content, and interaction with developers (loyal) users (fans). This is the engine of innovation, and given by the integration constant and never finished between hard and soft, between material and immaterial, between design and utility. In other words, an engine of integration between manufacturing and intelligent design mediated by light wings with a constant ability "to learn by the final users" (such as developers and intermediate) through a global brain and the incorporation of "advanced" chains of micro-innovations user-friendly, able to anticipate the future needs of users, final and intermediate. A strategic mechanism supported in the global competition from a business model powered by a strenuous defense of a highly integrated and closed proprietary model that "forced" to play by first comer following two main model: "Agency Model" and "Advertisement Model" between competition and cooperation. The entry of Apple into Tv market takes place in a period influenced by multiple dynamics of technological innovation and market as well as behavior (individual and collective) that could redefine the type of device and the predominant role of the different actors in the multimedia chain. We explore some of many economic and managerial implications. 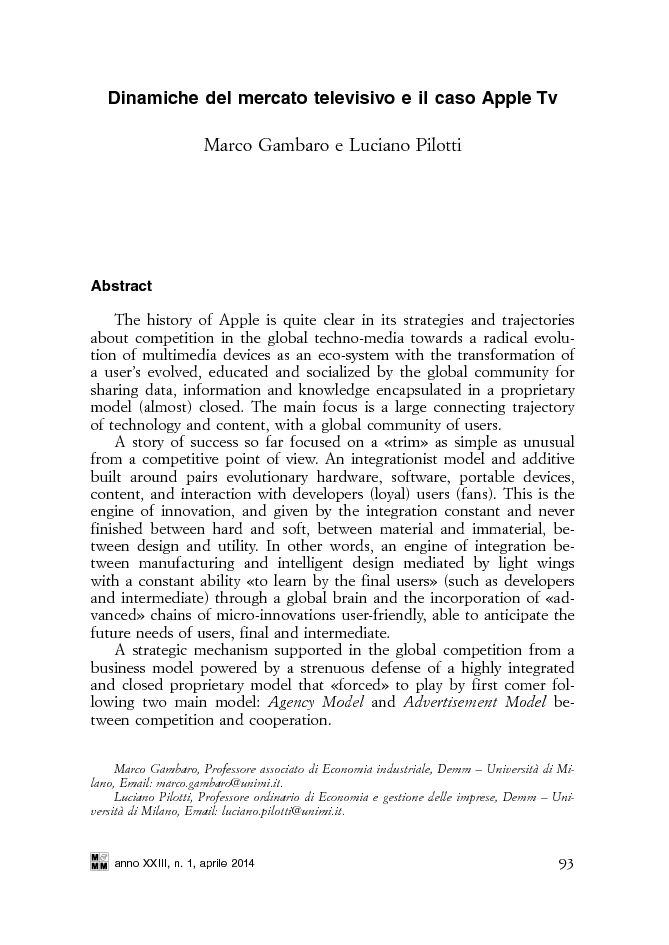