Inside the actual Italian system of the finance of Italian Municipalities the ICI has a double function: allowing the Municipalities to be fiscally independent, by means of the faculty they have to modify its tax rate and its deductions, as well as the way to manage it and, according to article 119, paragraph 4, of the Italian Constitution, also "to finance the public assignments they have been attributed" together with the other assets of revenue indicated by the same rule (taxes and own revenues; revenue sharings; equalization fund). As article 119 has never been carried out, the consequence inside our system has been a regular discrimination to the prejudice of those living in the poorest areas of Italy. They pay more but they receive less. Aim of this paper - also using an econometric analysis on the trend of tax revenues in italian municipalities from 1994 to 2005 - is to demonstrate that the fiscal pressure produced by the ICI is much higher just in such areas having a smaller taxable ability (given an equal assets' value, the applied tax rate is much higher) while, at the same time, tax payers receive less in terms of public services (the revenue "per capita" generated by taxes is lower). Such effects are not compensated by means of feasible equalization grants. 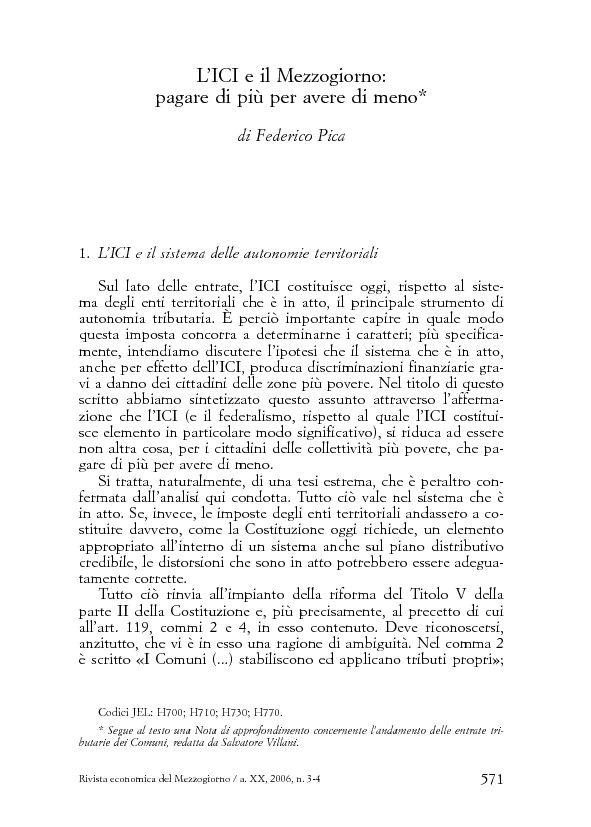