The endemic weakness of the Sicilian productive system is to a great extent due to its fragmentation in very small enterprises, technologically frail with a low propension to cooperate, and no prospect of achieving significant economies of scale and high production levels. Further aggravation comes from the usual bureaucratic constraints together with institutional ties and low supply of real and financial services. This is the background in which some "immigrants' entrepreneurial activities" are born. Such a development has brought a change in the traditional role of the immigrant worker. Theoretically, there are different approaches explaining the birth and the diffusion of such a phenomenon. Some of them focus on the supply side; other approaches focus on the demand side; still others on the opportunities that can stimulate the birth of ethnic firms. Through some indicators, in this work I have tried to check how large and pervasive is the phenomenon of the "immigrant entrepreneurs" in Sicily, and have tried to evaluate the role that immigrant entrepreneurs play in the development of the productive system in Sicily and their ability to develop further, also with respect to product markets. The purpose of this work is really to understand if the presence, on the island, of immigrant entrepreneurs can push the development of micro-entrepreneurship and of the local productive system or if, on the contrary, it may adversely affect the productive system, with the result that further elements of fragility are added to the local economic system. 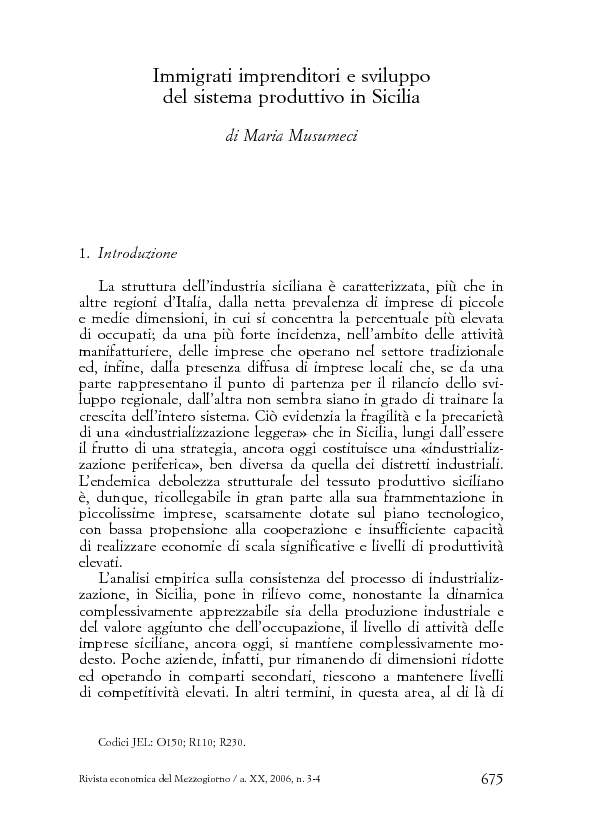